‘I am 38 years old and am in charge of the technical design department at Hart Schaffner & Marx. I went to a private vocational college to study haute couture.  I had been sewing since childhood and started making my own patterns as a teen; I also made my first tuxedo around sixteen years old. I am currently engaged to be married, with no children. Clothing and fashion was something I came to at a very early age — my mother taught me to sew, and she also taught us about quality garment construction and fabrics; it was not uncommon for us to turn garments inside out in stores to look at the finishing when shopping. My sister was a model for a time, and my brother is a jewelery designer. I studied music for many years, played piano until my accident, sang in an opera chorus, recorded with an early-music ensemble, and DJ-ed at parties and night clubs (I’m glad to see a resurgence in interest in vinyl — I still love my Technics 1210s). 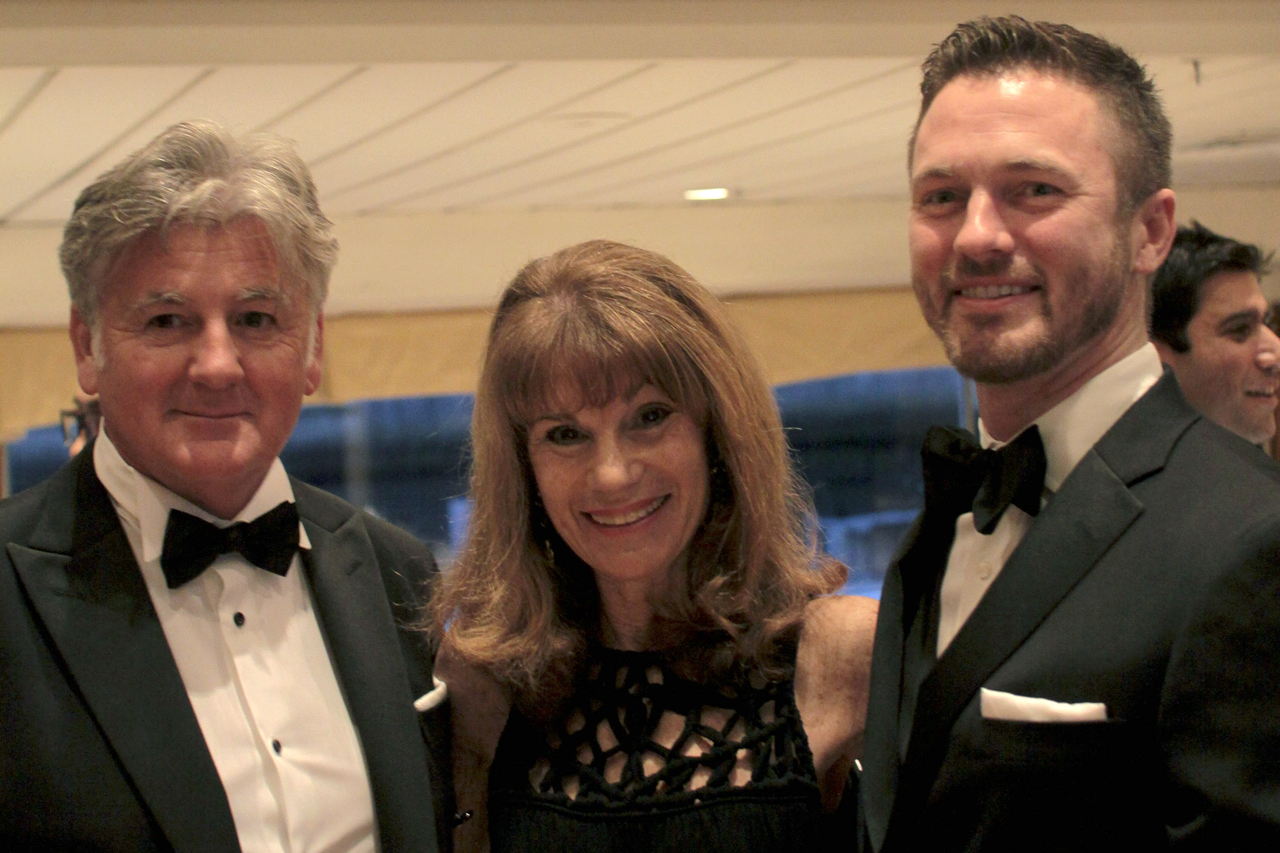 I don’t believe in the distinction between “classic” and “fashion”. Things that are supposedly timeless still have contemporary details which will look dated ten years on. Things which many consider “classic” today are still current interpretations of those particular styles. As a designer, even if I were to take a style right out of a 1930s illustration of Apparel Arts, I will still interpret it with an eye to current details instead of doing a very literal version of it, which would look costumey.

I became interested in tailored clothing from a very early age, which I suppose could be considered more classic, because of the sculptural elements of it, taking a flat piece of cloth and shaping it into a three-dimensional garment with shape and life. Only in tailoring do you find this kind of craftsmanship. I was obsessed with sleeves, which are probably the most challenging part of the coat to get right, and when done well, are, to me, an absolute thing of beauty. I have gathered my knowledge of clothing from every imaginable source; from people under whom I studied but also from the multitude of books that I have collected over the years, but also, more recently, from the internet. I also belong to a trade organization for tailored clothing designers, which put me in contact with the industry’s top people from all over the world and which holds a convention every year in a different part of the world. Exposure to, and exchanges with, other people just as passionate about the trade as I has been one of the most valuable resources in my career.

I would describe my personal style as experimental. I’m not afraid to try new things and to push the envelope a little; sometimes I fail, sometimes it works, but at least I’m not just always wearing the same things day in and day out. When you work in an industry and are surrounded by it every day, even a beautiful, classic navy suit can begin to look awfully boring and you want to try out new things (this is what can lead to the Pitti-Peacock Syndrome). There are days when my mood is such that I will play it safe and stick to something more conservative, and other days my mood is more playful. I suppose my style can also be said to be an extension of my mood that particular day. 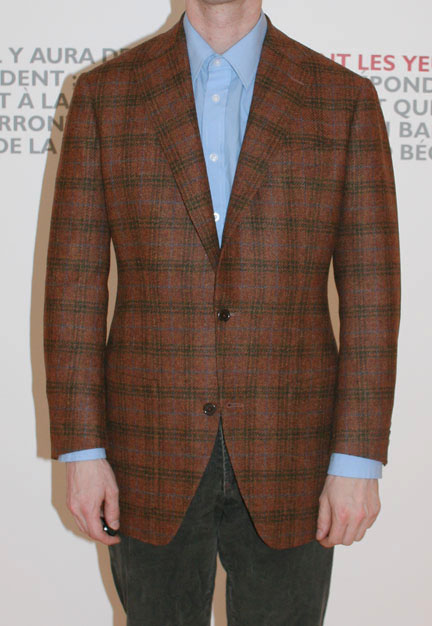 The [HS&M] company has been through a number of big changes over the last few years. I came on just as we were shaking things up at Hickey Freeman, which is about to be sold to Samuelsohn, the company where I started my industrial career. Once things were heading in a new direction at Hickey Freeman, our attention was turned toward Hart Schaffner & Marx. The company is over 125 years old and had begun to show its age. For Spring 2014 I completely revised all the silhouettes and details in the product offering. Our core consumer is still a fairly conservative American who is looking for a decent value, no-fuss business suit and I have to keep that in mind when designing the core offering. My main focus was comfort and ease of wearing for that customer; we named that range of garments after Chicago, the city where it’s all manufactured.

We have another range of garments which we named after New York, a slightly edgier, more fast-paced city. Things are a little trimmer, with a slightly higher armhole. This range is for the guy who was wearing Chicago but may want something a little more updated without feeling like he is being squeezed into a skinny suit. 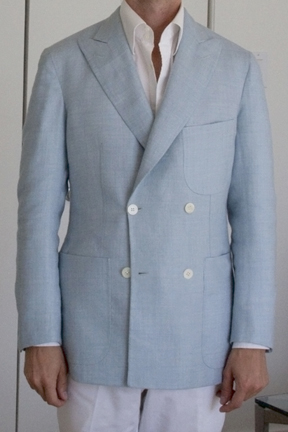 The most directional line is named after Los Angeles. Readers of my blog may be familiar with my personal style of cutting coats, which is pretty close to the body with a higher armhole and trim, contoured sleeve. The Los Angeles is very much in this style, but is quite a bit shorter than our more conservative cuts, since the current trend is for a very much shorter garment. I did a quick shot of one of the samples which we had made in something close to my size — you can see the kind of shaping I built into this silhouette. 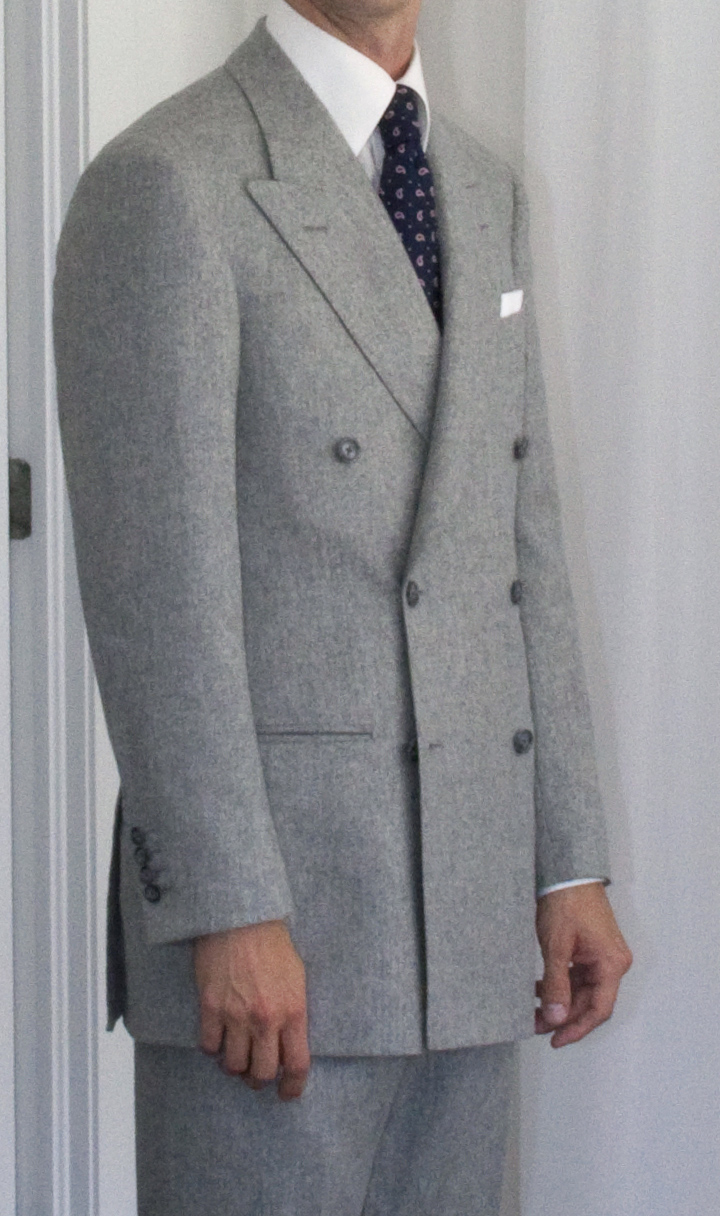 Since my day job pays well, and the days are long, the only time I would take on any private work is if I was doing it for enjoyment. I would make my own clothing, and occasionally do a garment for someone else, but that was not limited to tailored clothing; I have made a number of wedding dresses and similar things as well. I can’t say that I have a “house style” but if someone had come to me to make them something, it was because they knew my work and it appealed to them. I would have them bring me tear sheets (or these days, downloaded images) of things that they like so I could get a bit of a fix on what they were looking for, and from there would produce a few sketches. The conversation would progress from there. I had an accident last fall that severed several nerves in my hand and that surgery failed to repair so I have had to stop sewing for a while, until I learn to sew without being able to feel the needle. My first few attempts had me piercing my numb fingers without knowing it, and I bled on my work so for now, I am out of commission. 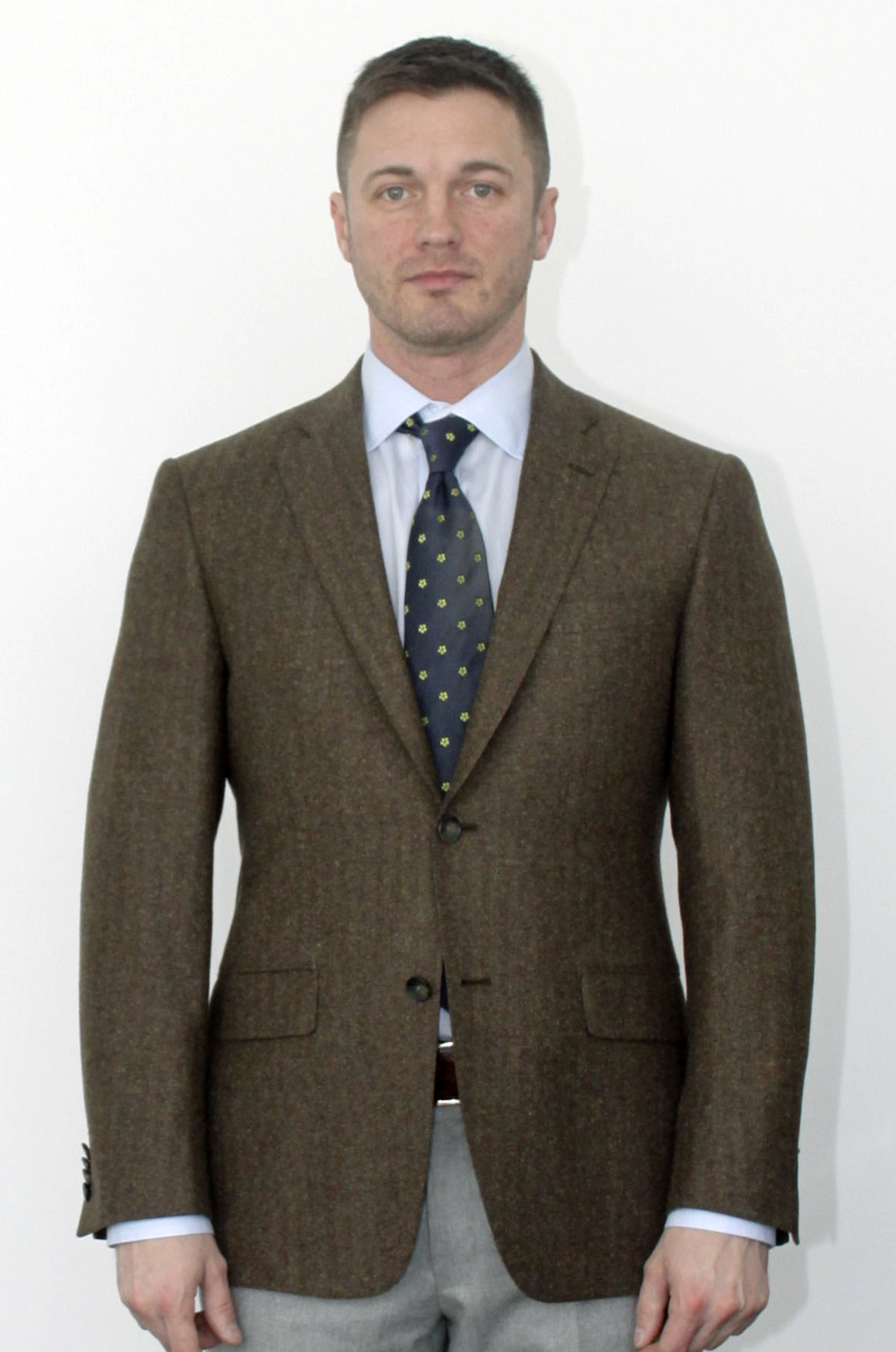 I initially found the online fora when googling something, and at the time there was a lot of misinformation about tailored clothing, and especially some of the basics such as what canvas and half-canvas meant; I realized that there was a lack of information available so I took it upon myself to provide some of it. I had to be able to remain completely impartial when discussing construction techniques, or when studying interesting clothing, so at first I remained completely anonymous. I did not want to seem like I may be shilling any particular product or hyping my own stuff.  Over time, however, I had to “come out”. The reaction to Tuttofattoamano was beyond surprising — I never imagined there would be the level of interest that there was, and was even more surprised and humbled to learn how many industry people were reading. View from the back

I think many jump off the deep end in search of bargains, which is a mistake. Whether it is thrifting or online Made to Measure, I think novices are prone to mistakes. These sources can be wonderful for the more experienced shopper, but until you have a firm grip on what you like, what looks good on you, and what the various details mean, I think it is much safer to stick with more traditional sources who can usually guide and inform the shopper. When you are just starting out with tailored clothing, try on as much as you can — even if it is out of your price range, you will get an idea of what cuts and styles and colors and textures work best for you. Once you have a fix on what works for you, you can start to narrow your selection to something closer to your budget. Clothing can be an investment and shouldn’t be rushed, and a great eBay bargain isn’t really such a bargain if it doesn’t look or fit right once you get it.’