The Aran jumper, also know as a fisherman’s jumper, is a knitwear model characterised by its off-white colour, large-scale woven patterns and heavy weight. Its name comes from the Aran Islands close to Ireland’s western coast. The jumper was first knitted from unfinished local wool, laden with sheepish lanolin which guaranteed great water resistance, and each jumper had the owner’s initials at the bottom. These, rather than any unique woven pattern, helped identify those lost at sea and later regurgitated by the unrelenting waves. While it is also romantic to think that fishermen kept calm and carried on in Aran jumpers, even if their knitwear might suck in some water, traditional Arans are stiff and thick. Guernsey jumpers were likely much more popular and handy among the fishermen of the islands. 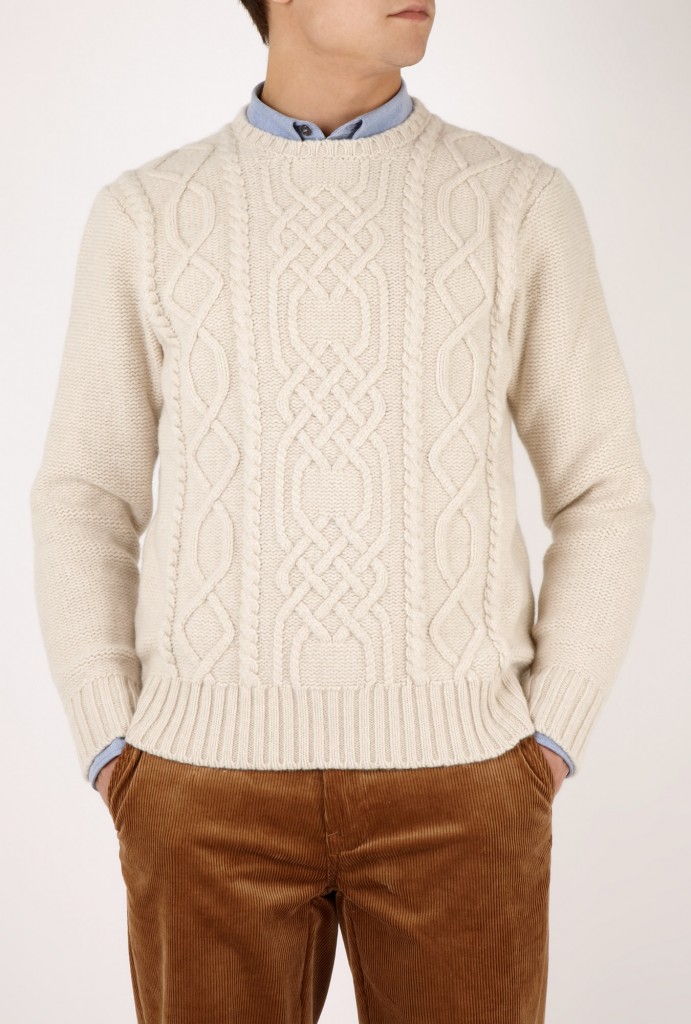 The Anglo-Irish playwright John Millington Synge lived on the Aran Islands for some periods between 1898 and 1902. His notes on the inhabitants were recorded in The Aran Islands, published in 1907, which offers the following: ‘In Aranmor many of the younger men have adopted the usual fisherman’s jersey, but I have only seen one on this island.’ By jerseys Synge meant Guernsey jumpers. Aran jumpers differ from Guernseys in their flat construction. They must be seamed, unlike Guernseys, which are knitted in the round. Thick seams won’t make for a very comfortable garments for active fishermen — there’s less freedom of movement, and the seams may split open under strain. This strongly indicates that Aran sweaters were not originally meant for fishermen, despite the many contrary claims on magazines and online sources.

The Aran model is an intricate combination of various patterns with symbolism. Honeycombs for industrious bees, anchors for safety on troubled waters, diamonds remind for the riches below the surface, basket weaves for full baskets of fish. These pictures run in vertical columns on the front, back and sleeves, while the main panel on the front is as wide as the neck. In 1891, the local goverment of the Aran Islands established The Congested Districts Board to look after troubled families with unemployment and a shortage of food due to lack of potatoes. The Board advised fishing families to weave and create knitwear for sale, teaching the locals intricate patterns. Before this time, the islanders favoured dark and oily wool for its ease and warmth. The Board introduced them to softer, undyed fabrics, along with improving their fishing methods.

The choice of heavy threads allowed the jumpers to be finished sooner and brought decorative weaves to the fore. The results were more than satisfactory. Kenneth McNally has shared the following in his historical perspective, Achill: ‘Instruction in various kinds of knitting was given to classes held at Keel, and in one year (to March 31, 1914) earnings from this single source totalled £510. Over the same period income from lacemaking was £102 at Achill Sound, and £34 at Keel.’ One century ago five hundred pounds had quite a bit more buying and staying power than today.

The eccentric Aran proved popular even in faraway America, and this woven revenue helped fishing families during times of trouble. Dozens of new weavers were trained to meet high-piling order lists before machines met the challenge and shrunk the demand for artisanal models. The Aran jumper is still one chunky, cosy, warm and detailed piece of casual knitwear, offered by most retailers worth their salt. Models knit from unfinished wool have become a rarity as the lanolin oils do have an eccentric smell some noses may find unpalatable. Wool-nylon blends make for cheap and sweaty alternatives, while hand-knit models offer a tight weave along with a hefty pricetag. The Aran model is still a bit like the odd man out. Its off-white colour is far from practical in hunting, trawler fishing, gardening, so on, and the thick fabric may just wear too hot indoors. Aran jumpers, then, may just work best in dark colours instead of the creamy original for the centuries to come.