An interview with Thomas Mastronardi

VR: Your age and occupation?
TM: I’m originally from Chicago, but have lived in New York since 1977, which means I’ve worked in the apparel industry for the better part of 40 years. For three decades, I owned and operated a marketing and consulting agency focused primarily on luxury brands. Then, in 2012, one of my clients (Paul Stuart) offered me the in-house role of Chief Marketing Officer. When I left Paul Stuart, I decided that rather than simply rebooting the previous business, I’d partner (happily) with my wife in reimagining the firm and our mission. She is an award-winning television director, writer and producer who edits my copy in a painfully ruthless manner but also creates absolutely sublime digital videos. 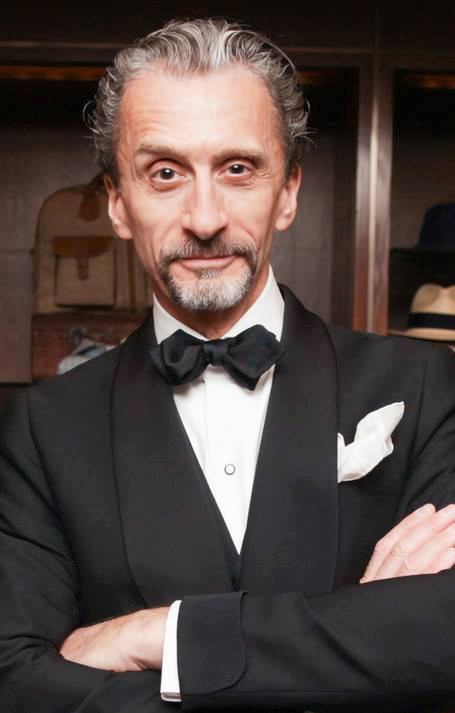 Our objective is to give voice to the very DNA of the brands for whom we wholeheartedly invest our time, experience and expertise. For us, this means helping to create, maintain and disseminate sophisticated, distinctive, branded messages that are, in every way, equal to the standard of the brands themselves. We craft text and create imagery that extends beyond the classic applications of PR, publicity, print and/or digital advertising and catalog applications. In this process, we also invent content for SM; a brilliant and beautiful beast which we all know is never sated.

It’s a pity that marketers are all too often willing to leave the lion’s share of content creation to followers, influencers, and other outside players who, despite their good intentions, nevertheless impart an editorial point of view that fails to uphold the genetic code of the brand. This outside influence can disrupt the very core of the brand’s image, which can prove harmful to the brand’s identity. So, when we service a client, we prefer to take a 360-degree approach to messaging —always mindful that safeguarding the essence of the brand is our primary purpose. 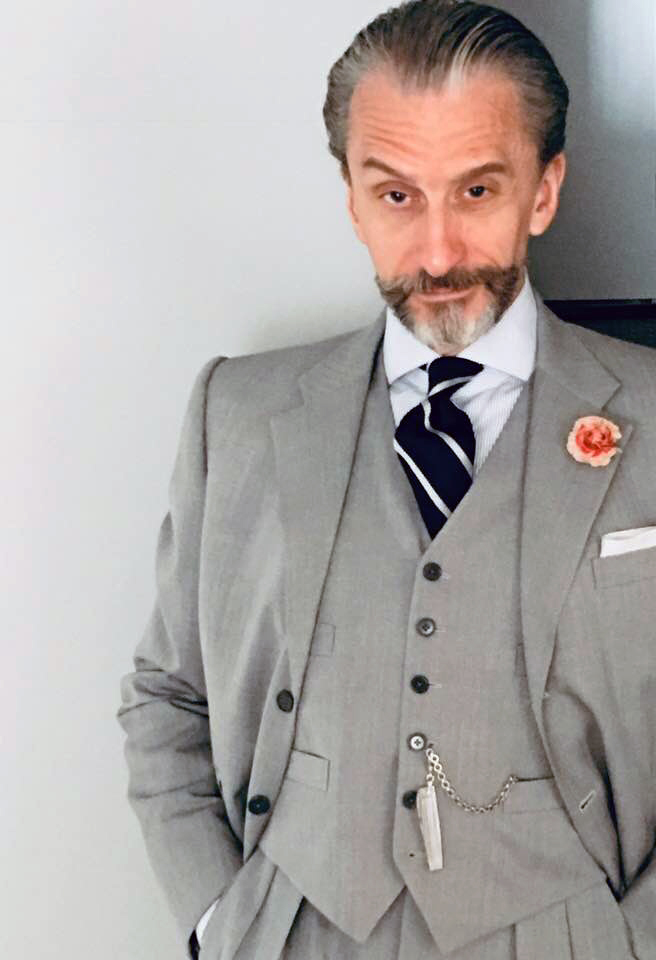 TM: I was a Theatre Arts major, and, like a thousand others, originally moved to the city to pursue a career on the stage. Although I supported myself (meagerly) as an actor for a time, I find my best performances – and often the most dramatic — are given on behalf of my clients.

My love of tailored clothing began, as I imagine holds true for many, in observing my father. He was a blue-collar worker who, on weekends, would transform as he traded his workwear for a perfect navy serge suit, brilliantly polished cap toe oxfords, and a perfectly knotted tie. Thus attired, he would take my mother dancing. It made a lasting impression. Growing up, I was also obsessed with the movies and noted very early on that the lucky devil who inevitably ended up with Audrey Hepburn or Grace Kelly on his arm was invariably sporting a perfectly cut suit. That was it for me. No more cowboys, astronauts, or knights in shining armor, instead, the dapper boulevardier became my ideal (excepting, perhaps, Robin Hood — the allure of the Greenwood remains). May as well give credit to Socrates; “Beauty comes first. Victory is secondary. What matters is joy.” 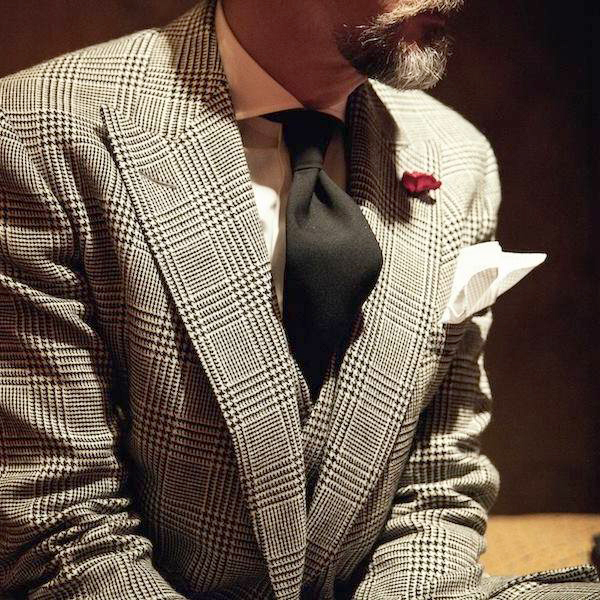 VR: Have you any children or spouse (and how do they relate to your style enthusiasm)?
TM: I am married to a brilliant, beautiful, stylish woman who, in equal measure, encourages and grounds me — and who insists that for every new suit that finds its way into my wardrobe an old soldier needs be retired. (Often painful, that.)

VR: …and your parents and siblings’ reactions back when you were younger?
TM: My Dad taught me to care for my clothes like they were tools – I suppose he was remarkably prescient in that. And I still take real pleasure in shining my own shoes. VR: What other hobbies or passions do you have besides apparel?
TM: I am an inveterate and passionate reader, of history, biography, fiction. I’m just in the midst of Terrance Stamp’s wonderful memoir “The Ocean Fell Into The Drop” which includes his enthusiastic account of the pleasure of bespoke footwear by George Cleverly. I love novels especially, and find that Ralph Waldo Emerson’s famous quote – “Fiction reveals truth that reality obscures.” – is spot on. And, I very happily maintain an unabated passion for theatre — shared, as are all the great and good things in my life, by my lady wife. But I’m also an unrepentant ‘gym-rat’, and once my body began to betray me and recently put an end my lifelong pleasure in distance running, I became addicted to high intensity interval training at a local ‘boot camp’. I embrace a pretty rigorous approach to personal discipline; believing that fitness, grooming, dressing all speak to a certain mastery of self. Of course, there is also the fact that I am, arguably, as vain as Lucifer. VR: How did your interest in style change, and when did you turn your eyes towards the classics?
TM: I began working in clothing shops as a teenager, eventually moving from retail to wholesale — but always working on the ‘pre-sale’ if you will. I was driven by a fascination with advertising and marketing, of perpetuating the promise (that I expect initially ignited my own interest in tailored clothing) of a lifestyle unfailingly enhanced by looking the part. I also discovered a cache of old Esquire magazines from the 1930s at one shop and was struck by the brilliant illustrations of Laurence Fellows — who remains a great favorite of mine to this day.

VR: How would you describe your personal style?
TM: Suave and sophisticated? Dapper and dashing? Well, at the very least, a bit rakish squared with a certain gentlemanly restraint. I aspire to classically tailored perfection and remain convinced that, no matter how far short of that goal I may fall, there is nobility in the attempt. It’s been said that being well dressed is a form of respect — both for oneself and for all those whom one encounters in daily life. I see no reason to dispute such sound reasoning. Attention to detail, proportion, balance, offset by a bit of judicious rule-breaking.

That said, I find that a prudent dose of snobbery stemming from a reflection of pride in one’s tailor is acceptable, even laudable — while the supercilious self-proclamation of dandyism is never appropriate for me. Elegant understatement is key; a discreet flash of brightly hued hosiery, a subtly complex interplay of pattern and texture, and a circumspect bud in one’s lapel are all very good things. A cacophonous submission to self-aggrandizement is the inverse. I was once told that a truly well-dressed gent is not noticed upon arrival, but rather upon departure, leaving a singularly stylish vacuum in his wake. I continue to aspire to being that man. 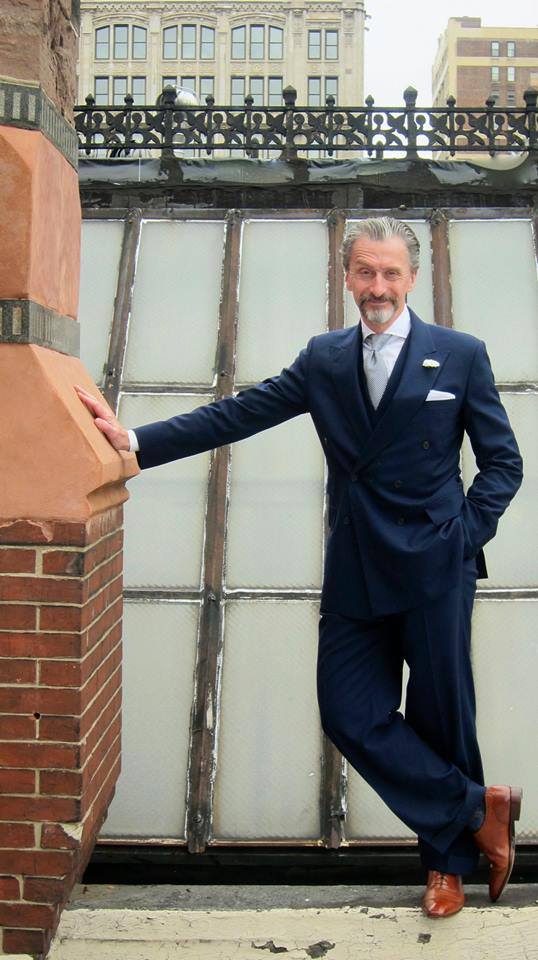 VR: Among so many companies you’ve tried, which artisans or RTW makers do you favour — and why these?
TM: They are, blessedly, too numerous to mention — and seeing that I have been fortunate to have worked with some of the very finest brands, my favorites won’t be too difficult to extrapolate. I will say that we are currently working with a young clothier named Paolo Martorano, whose estimable knowledge, refined approach and absolute dedication to achieving and maintaining the very highest standards in bespoke tailoring is easily among the very best I have ever had the pleasure to experience — and is resulting in some of the finest garments I’ve ever had the pleasure to wear. The simple fact of his youth is utterly inspiring to me; the opportunity to work with him is one of the benefits of this stage in my career, where I can choose to associate myself with — and genuinely embrace — those artisan craftsmen and creative visionaries whose work I truly admire, without concern about compensation. It is an unexpected perk of greying that is to be savored. 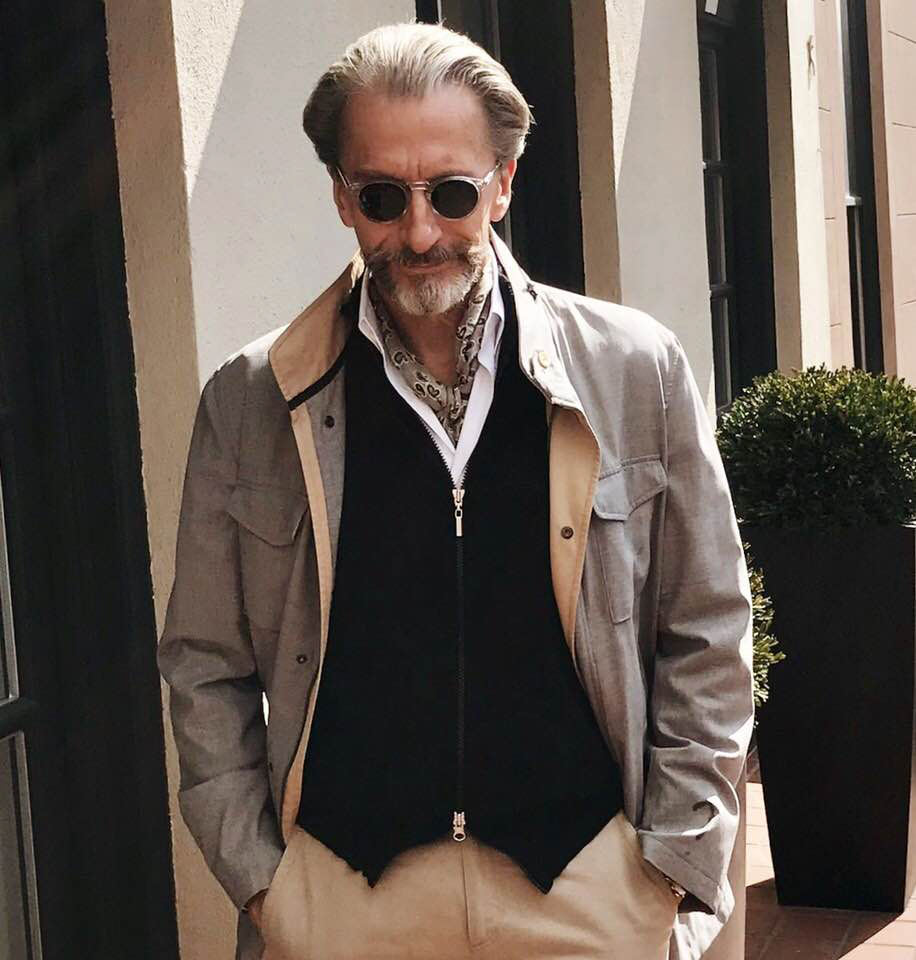 VR: Have you any particular style or cut philosophy behind the clothes you’ve commissioned?
TM: The classics. I remain a staunchly uncompromising aficionado of both double-breasted jackets and of three-button (roll-to-two) single breasted. I am also utterly unwavering when it comes to high waisted double-pleated trousers (and, of course, the attendant, indispensable braces they require.) And it allows me to carry about all the bits necessitated by day-to-day life in commodious trouser pockets rather than spoil the cut of my jacket. VR: Who or what inspires you?
TM: Oh, to begin with, the usual suspects from the Golden Age of gentlemanly attire — which, quite handily, remains available to us in the photographic images and films of the 1930s: Fred Astaire, Gary Cooper, The Duke of Windsor, Anthony Drexel Biddle, Jr., Cary Grant, Gianni Agnelli, the great Adolphe Menjou (the very best-dressed man in Hollywood). When I was very young I took a rather important date to see a production of a play called “The Pleasure of His Company” starring Douglas Fairbanks, Jr. — who was, at the time I suppose about the same age I am today. His performance was more or less a master class in effortless charm and dapper affect. The impression he made on my young lady was not lost on me, nor was the program which credited Mr. Fairbank’s tailor, hat maker, shoemaker, etc. I greedily quaffed that particular Kool-Aide.

More recently, but no less resoundingly, I continue to be inspired by my former business partner, Robert E. Beauchamp, along with another great former fashion editor and for me a personal style exemplar, Robert Bryan. I can go on and on: Simon Crompton, John Pizzarelli, Luciano Barbera, Joseph Barrato, Bruce Boyer, the great Gay Talese (who recently gifted me with one of his personal Homburgs). The common thread – no pun intended – is the clear appreciation for the classics, but in each case I ‘ve noted, classics imbued with a definite and uniquely personal sense of style. 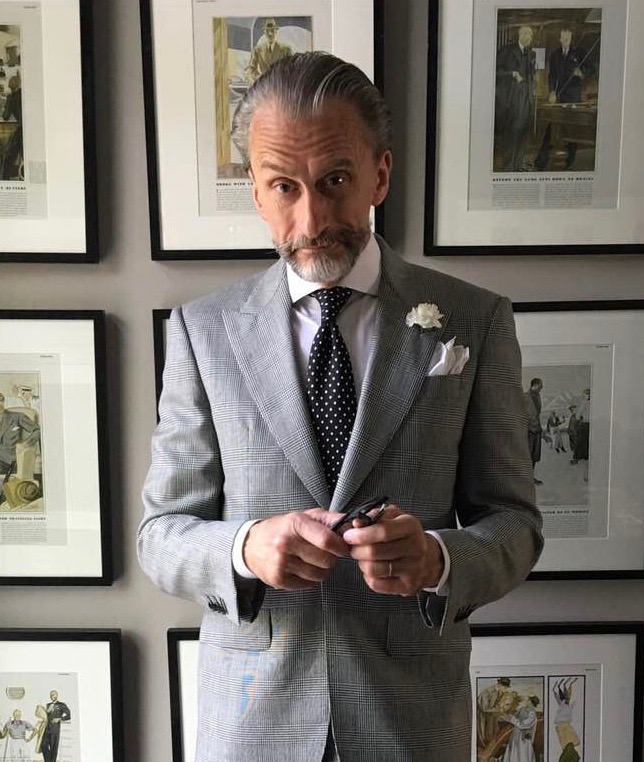 TM: Confidence. Nonchalance. Grace, certainly. And rigorously disciplined attention to any detail over which we can exercise control. This certainly includes our personal presentation, but extends, by necessity I believe, to how we elect to comport ourselves. Dressing well may not indeed be the best revenge, but it certainly is, for me at least, a core component to a living well. 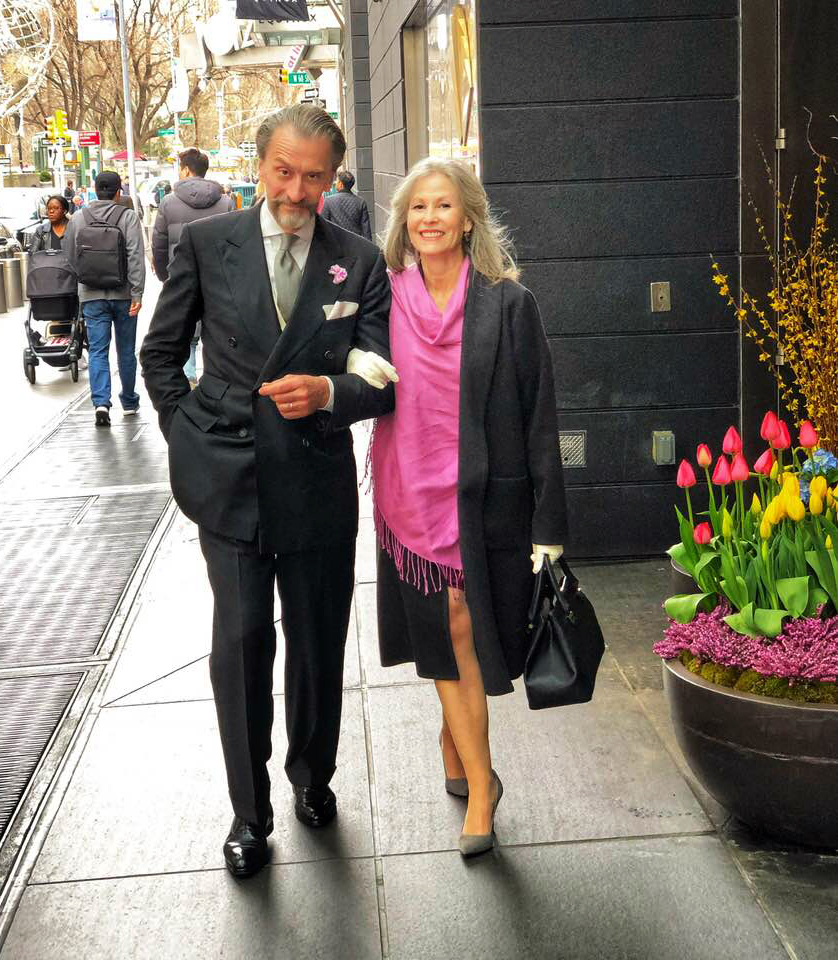 VR: Finally, given your long time with Paul Stuart, how would you say they differ from other clothiers based in New York?
TM: Paul Stuart may well be the final bastion which professes style over fashion vis-à-vis men’s apparel to be found in the United States. No mere collection of varied brands, instead, a highly-curated approach to gent’s natty. And like that approach, sadly something of a vanishing breed.