Men in Style: The Golden Age of Fashion From Esquire

In 1993, the American publishing house Rizzoli performed a small-scale cultural achievement. To this day, Men in Style: The Golden Age of Fashion From Esquire is the only English-language collection of style illustrations from Esquire magazines published before 1950. Great leaders of lines and colours, such as L. Fellows, drew inspiration from jet-set venues and real-life characters on both sides of the Atlantic for fine images, while the editors from Esky peppered them with pithy commantary. Before around 2000, these moving pictures had staying power only on the shelves of collectors, so much so that the most helpful of them have shared scans online — and these illustrations bounce back and forth on menswear sites even in 2014. 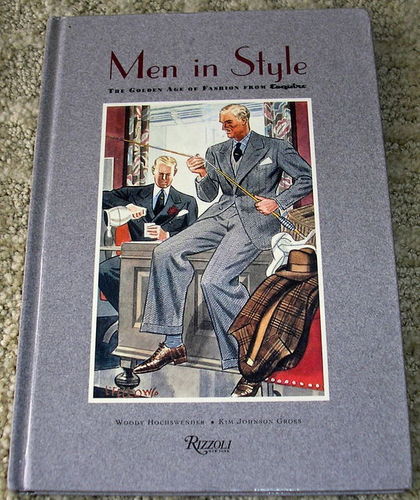 Men in Style was edited by Woody Hochswender and Kim Johson Cross, who both busied themselves in style as part of Esquire’s team back then. The collection runs a bit over one hundred pages, with original olden commentary and interesting contemporary essays on the changes in men’s fashions from the ’20s to the ’40s. Just a quick bit from the pages: rationing fabrics made three-piece suits and double-breasted jackets mostly obsolete during the second WW. With no reprints since 1993 and scarce copies to be found, this small book costs several hundred dollars today. While I’m not too convinced whether the fine folks at Rizzoli can be coaxed to run a re-run of the book, some anonymous menswear dilettante has scanned the book and shared the PDF with the rest of us. I’m happy to pass along the Right Stuff on Keikari. The book is an essential add for men of lore and vintage alike.

The link below should work nicely for the time being, and a quick search online should show up more sources if this one is removed.