”I’m 29 and my main gig is Newton Street Vintage, where I sell vintage menswear that I like. Mostly tailored stuff. I also write for and help edit Ivy-Style.com, and I help friends with their stores and small branding projects. I’ve worked in custom tailoring and retail menswear. I have a master’s in literature. I think my love of clothing is related to my earliest aspirations to tell stories. I went to the University of Edinburgh for grad school so I could look at tweed when I wasn’t reading books. Also, the whisky. I have a long-term domestic “spousal equivalent,” which is far more romantic than that term sounds. She responds very well to my love of clothes, and she gives me sewing projects, which is always fun. We have the same tailor. She wears navy blazers and gray cropped trousers. 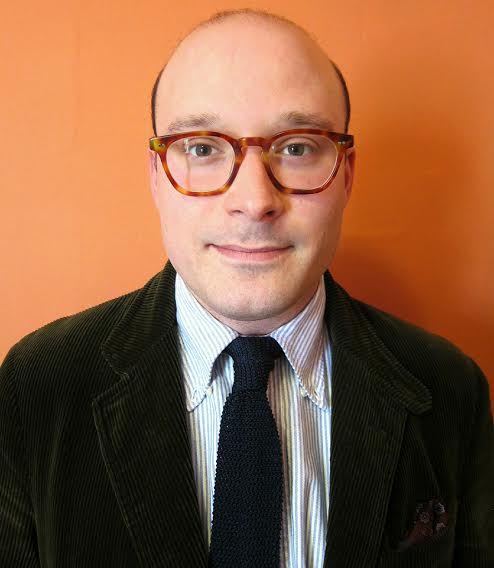 I got into clothing because I wanted to look like my early rock’n’roll heroes. Somewhere out there is a photo of me at 18, imitating young Bob Dylan imitating old Woody Guthrie. I was into jeans at first. Vintage Levis. I went nuts for them. I remember seeing in the liner notes to the Bruce Springsteen Live 1975 box set that Bruce had an orange tab on his Levis, and it started a relentless hunt for that orange tab that opened up the world of vintage. I think getting into vintage trains the eye for the classics. It’s so much easier to accidentally stumble onto the classics when you’re into vintage. [For hobbies I’ve] reading, writing, cooking. I’ve been reading Michael Chabon’s The Mysteries of Pittsburgh, and it’s a crime that it has taken me this long, seeing as I am from Pittsburgh and it was written 4 years after I was born. 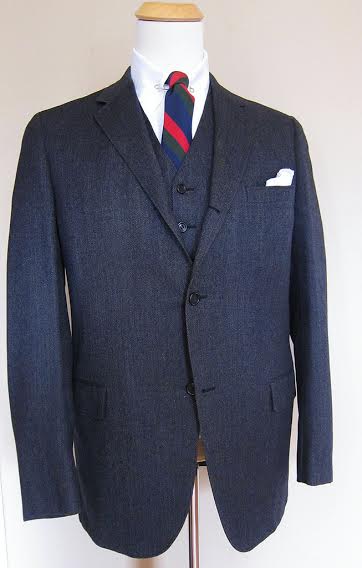 I think in America, most men have a vague sense of the Ivy League style, even if they don’t have the term for it. Button-down shirts, khakis, and penny loafers are pretty ubiquitous here, even if they’re worn in a banal way. I gravitated toward it before I knew the term. It was an offshoot of a youthful fascination with the ‘60s, but I’ve definitely moved past that now.  I think it started with a feeling. I liked the way the soft shoulders felt. There was something imperceptibly different about it, and I couldn’t put my finger on it at first. I was big into Godard films at the time, and without understanding the subtle differences I thought my Ivy suit made me look like Godard. The premature baldness also helped. 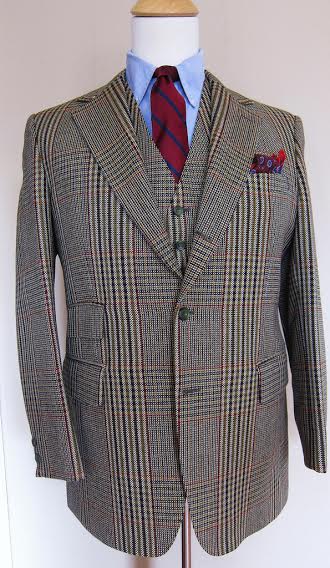 I gained my knowledge by working with the clothing, handling a lot of it. For me it is a tactile pursuit. The internet is obviously a major factor, but I would use it to research something that I found, something that I had in my hands and could touch. You learn about clothes by handling clothes in the same way that you learn about cooking by working with food. Years ago I was also desperate to learn how to sew and construct, so I paid a local tailor/patternmaker for private lessons. She was great and really helped me get a firm foundation in construction methods. 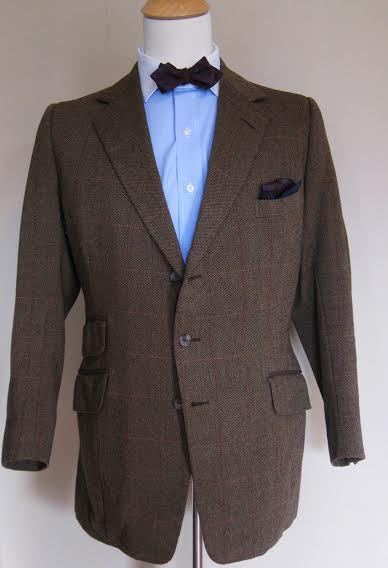 Brown tweed suit with crows foot weave by Bernard Weatherill of London, circa 1980

I’m constantly experimenting with clothes. I know this isn’t what I’m supposed to be saying. I’m supposed to describe my “uniform” and how I’ve edited my wardrobe to reflect my unique self. Truthfully, I like trying new things, and working with vintage and second-hand gives me room to experiment. I tend not to dismiss things unless I’ve taken them for a spin to see how I feel. I love old Brooks and J.Press obviously, but I also love the cut of Ralph Lauren’s Italian-made tailoring. I’d definitely spend a ton of money in Sid Mashburn if I had it. I love the Andover Shop, and I had a blast working there. That place has the best colors and fabrics of any store on Earth. If I had to describe how I’ve been dressing lately, I would say it is “soft tailoring with lots of color and pattern.” I definitely haven’t been on a minimalist kick lately, and I think the idea that Ivy precludes color is an internet myth. The Andover Shop has always been a testament to color. Which tailors do I favor? I don’t have very much MTM clothing, although I have a gorgeous windowpane suit from Martin Greenfield which I had made for me back when I worked at a shop that contracted to the Greenfield workshop. It is beautifully made. I think if I had the money, my tailored wardrobe would be equal parts Anderson and Sheppard, Paul Winston, and Cesare Attolini. 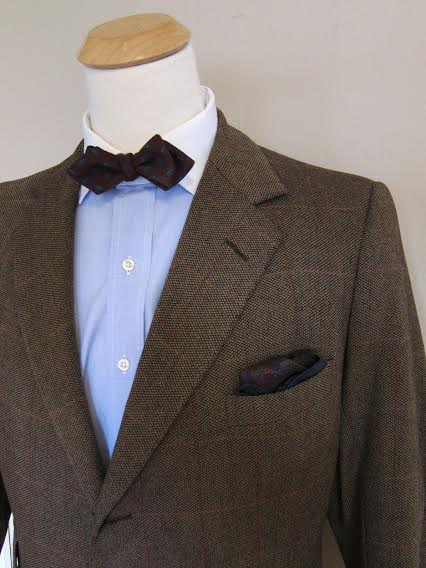 Cambridge, MA. inspires me. The old guys that you see around here. Sometimes it is the more typical idea of the old Ivy Leaguer, with a blazer or a Shetland, but other times it is a really interesting hodgepodge — a Kiton jacket with J.Press chinos, or a double-breasted blazer with blucher mocs. Again, lots of color, more than you would expect. The guys used to come into the Andover Shop and I would just be amazed at the style. Authentic, individual dressing. Not an Apparel Arts facsimile, not a Take Ivy facsimile either. Guys who knew their way around Jermyn Street as well as J.Press. I am also continually inspired by estate sales. You go into this guy’s house and his whole life is in the closet. It’s a hard thing to do at first, rifle through other people’s belongings, but you learn to do it with a certain amount of reverence. You see the evolution of personal taste, and the changing of details with the passing decades. What ties he wore in the ‘60s, ‘70s, and ‘80s. I’m definitely a postmodernist and I like eclectica. From what I have seen, well-dressed men have eclectic wardrobes. 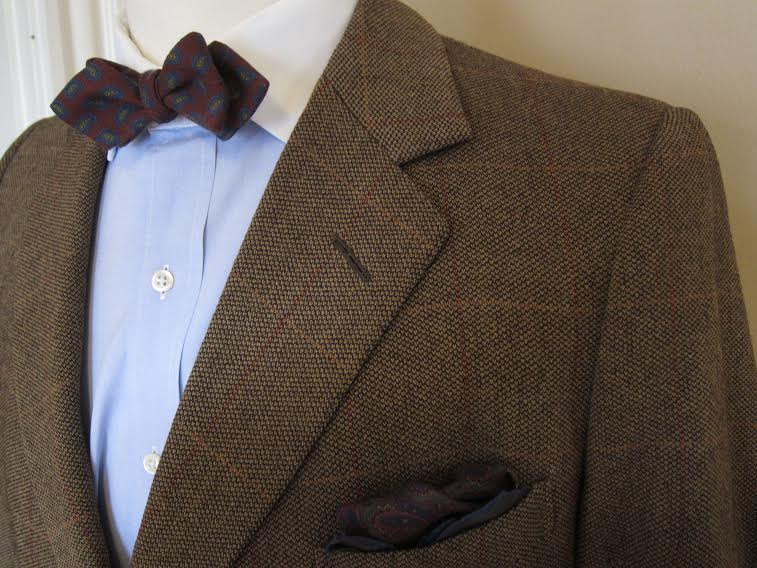 I could talk about personal style, or use the Gore Vidal quote, but my favorite quote about style is from Jean Genet:

‘To achieve harmony in bad taste is the height of elegance’

I started Newton Street after many years of collecting this stuff. I had a friend who sold objects and small furniture on Etsy, which was still pretty new at that point. She talked me into it. At first I was using a camera phone to take pictures of clothes in my kitchen, but I sort of built it up and refined it from there. I had no goals in the beginning other than to get rid of some clothes. But once the demand became apparent, I started hunting specifically to sell, instead of just for myself. I think it has been pretty well-received. I got a nice mention in the retailers section of Hollywood and the Ivy Look, I’ve sold clothes to TV shows like Mad Men and Vegas, and to the design teams from major brands which shall remain nameless. Mostly though I love it because it gave me the opportunity to have fun for a living and leave an office job that wasn’t going anywhere. It also helped me talk my way into working in tailored menswear, which was my initial goal. 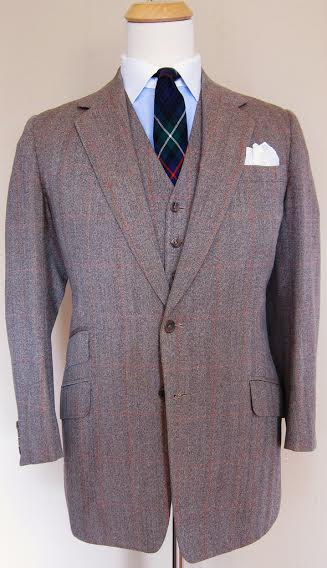 Herringbone tweed with red windowpane by Hogg and Son of London, circa 1960

I think, ultimately, that when it comes to vintage clothing, people who know what they want will get it where ever they can find it. I’d like to think that I present my items well, describe them in a way that makes people think about them as independent goods, and not just a cheaper means to an end, or something that is at the end of its life cycle. There are people out there who would rather have old clothes than new, and I try to speak to them. I think I also have a pretty good eye for this stuff, so I try to balance the staple gray herringbone with the crazy plaid tweed, and the occasional piece of workwear. 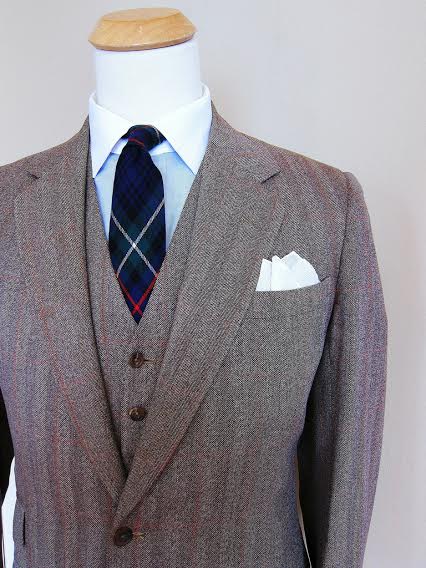 I’d say it is actually important to learn about traditional style while keeping one eye on fashion. Even if it is only so that you know what to reject. Experiment; it’s all too easy to find some sort of ‘manual’ and paint by numbers. Be playful. Humor invigorates style. I think the internet has created a judgmental culture of ‘face palms’ and ‘fails.’ I’m a total disaster most of the time. But, to quote Samuel Beckett: ‘Try again. Fail again. Fail better.’”

The English Country House Look by G. Bruce Boyer »
« Captain Hogspear and the sport of kings