“I’m 70 years old [this interview took place two years ago], and continue to write about men’s clothing. I write regularly for The Rake, which I think is the best men’s fashion magazine in the world. I’ve also just written a book about the film star Gary Cooper with his daughter, Maria Cooper Janis — Gary Cooper: An Enduring Style — which will be published by Powerhouse Books in November of this year. It’s a study of Cooper’s style and the book contains over 100 photos from the family archive which have never been seen before. I’m very proud of this production. I have a Bachelor’s and Master’s degree in Literature and was a professor of English Literature for 7 years before starting to work as a men’s fashion writer for Town & Country magazine. My wife and I have been married for 28 years, and have no children. My wife was a research editor for Prevention magazine for 15 years, and is a good critic and editor of my writing. She has always been a beautiful woman, but doesn’t take as much interest in fashion as I do. She’s much more interested in our two Papillon dogs and cooking.

I have no siblings, but I credit my mother — who died just a few years ago — with my interest in clothes. She allowed me to choose my own clothes from the time I was a small child, and to experiment with different styles. This is the way I learned about clothes, by trying different types of clothes and discovering what suited me best. She allowed me to develop a familiarity and comfort with clothes, and so I was never afraid of trying different styles. I would say that I was aware of the importance of clothes — the effect they could have on people — by the time I was 10 or 12 years old. Like many Americans, I went to the movies regularly and was enchanted by the great actors with style — Fred Astaire, Cary Grant, Gary Cooper, Clark Gable among them — and how effortlessly they dressed. I tried to imitate them as best I could. I studied they way they tied their neckwear and what sort of shoes they wore and the cut of their trousers, the style of their shirt collars, that sort of thing.

I was interested in all sorts of clothes, from Zoot suits to motorcycle gear, and that made me understand that all clothing is a costume of sorts, a uniform worn by a certain group of people, and that we dress to identify with a certain group in society. When I was about 14 I became interested in the Ivy League/Preppy style of classic American clothes because I wanted to identify with university students. Then when I was about 18 I began to be interested in the British style of dress, I suppose because so many of the film stars I then admired were British — Sean Connery, Rex Harrison, Terry Thomas, Ian Carmichael, men like that — and a few Italian stars. Marcello Mastroianni I thought wore clothes beautifully. European films were a big influence in the USA in the 1950s. 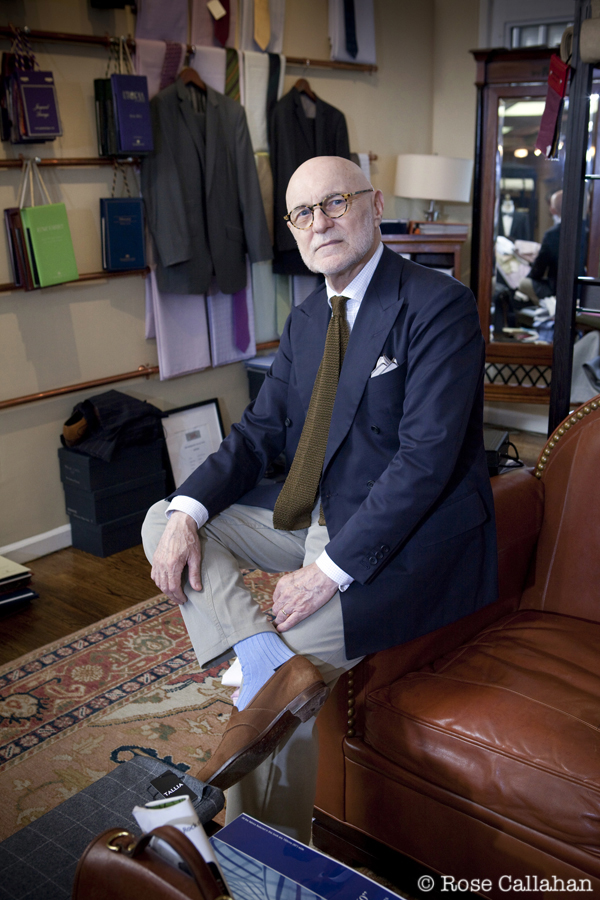 In addition to films, there were two American men’s fashion magazines which were very good at the time: Esquire and GQ. I read each edition every month, studied them and learned a  great deal. Today I learn a great deal from the bloggers, many of whom I find are young and very intelligent and stylish. I’m a regular follower of Ivy Style, Simply Refined, Maxminimus, Rugged Old Salt, The Trad, The Sartorialist, The London Lounge, A Continuous Lean, Die, Workwear, Manligheter, Men of Habit, Permanent Style, Tweedland, The Daily Prep, to name only a few. And now Keikari of course. I also read books on costume history because I’m interested in how clothing has developed. So I’d say I’m interested in clothing in both a fashion and an academic sense.

My personal style is transatlantic: part American Ivy League, part English Savile Row, with perhaps a small dash of Italian brio for color. I’ve always been very conservative in my personal tastes. It’s probably the only part of me that is conservative. I prefer tailored clothing that is easy-fitting but with some shape. I don’t like tight, restricting clothing, which I find is too much the style today. My particular addiction is to tweed sports jackets (worn with jeans, khakis, cavalry twills, flannels, or corduroy trousers). My grandfather bought me a Harris Tweed sports jacket when I was 14, and I’ve loved tweed ever since. I also prefer button down shirts and suede oxfords with everything.

I’ve bought custom tailored clothing since I was 18, although I’ve also bought off-the-rack on occasion. In readywear tailored clothing I think the Italians are now the best — Brioni, Kiton, Castangia, Corneliani, and several others. I find I’m always impressed with the better makers of English shoes, such as Edward Green and John Lobb and G. Cleverley. I’m also a fan of Ascot Chang shirts, and Drakes of London ties and scarves. My favorite tailors would be Cheo and Logsdail in New York, Anderson & Sheppard and Steven Hitchcock in London, and Rubinacci in Naples. To complete my wardrobe I wear John Locke hats, Brooks Brothers tie-back undershorts, and Roger & Gallet eau de cologne. My tastes are very simple.

I’ve never been as interested in fashion as I am in taste, style, and quality. Style is the most enigmatic and interesting because it’s so inexplicable and you can find it anywhere. It seems to have nothing to do with wealth or intelligence or any particular skill. As far as fashion is concerned, I’ve always agreed with Oscar Wilde, that it’s something so dreadful, we must change it every several months or so. Fashion is based on communal exaggeration, style in based on self-awareness. 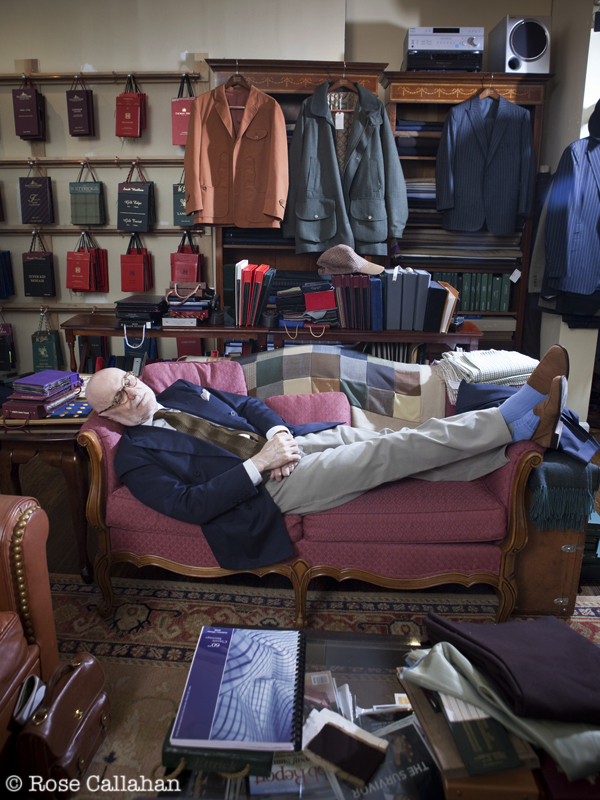 When I first left off teaching I thought I would miss it terribly, but in retrospect I was probably not suited for the academic life. I was, I believe,  a good teacher, but not the best scholar. Working for magazines like Town & Country and others allowed me to travel a great deal, to meet interesting people who were experts in their various fields, and to test my ideas in print. Writing books gave me a certain validity in the field, it increased my stature a bit as an opinion-maker. I love every aspect of the clothing business — the designers, retailers, manufacturers, promotional people, and media — but I particularly am enamored and respectful of the true craftsmen, the tailors and shirtmakers and bootmakers and cloth experts. Craftsmen are artists, they give their hearts and lives to their work, they are more interested in perfection than riches. They are always the most interesting people.

Apart from clothing, the great loves of my life are music and literature. I’m an aficionado of jazz and blues, particularly between 1925 -1965. In literature I used to read more novels and poetry, but now I read more memoirs and biography. I’ve had a long interest in British Restoration-Augustan literature, and 20th Century Afro-American literature.

For young men just starting out, I would want to persuade them to slowly build a wardrobe based on conservative taste and good quality. Three good pairs of shoes are better than six cheap ones because the good ones will last longer and look better even when they’re old; the cheap ones will look cheap even when new and they won’t last long. I always feel I can never afford to buy cheap clothes. I have shoes and ties and shirts and sports jackets that are more than 20 years old, and they fit and feel marvelous, and look more wonderful than when they were new.

Start with a few classics: a good blazer and gray worsted suit (the weight of which will depend on your climate); a few good light blue shirts; a good pair of dark brown oxfords; a few simple dark blue silk ties. Then add a few pairs of odd trousers (khakis, flannels), a tweed or lightweight sports jacket, a nice cashmere sweater. A few more ties, a pair of slip-ons, that’s the way to build a wardrobe. Never buy anything that can only be worn with one outfit; a tie that can only be worn with one certain suit or jacket is an expensive tie no matter what it costs. Resist fashion trends. Just because this season a lot of people are wearing red trousers doesn’t mean it’s a good idea for you. Learn what works best for you, what you like and feel comfortable with, and stick to it.”

~ Originally published in Finnish on the 23rd of October 2011