‘My age is 60 and I am the owner and CEO of “Tompkins”, a ready to wear men’s clothing business. From 1982-2012 I was a proprietary trader on the New York Futures Exchange (1982-1991) and the New York Stock Exchange (1991-2012). I attended the boys prep school Deerfield Academy (1966-1970) and graduated from the University of Virginia in 1974. I’ve been married for 30 years this December to Karen Moody and have two daughters, Frederica (26) and Suzanne (24). They all love elegant style. Karen’s father was chic and both of my girls worked in fashion when they graduated from Vanderbilt University: Frederica, at Ralph Lauren as marketing manager for RL Home, and Suzanne at Michael Kors. I play a lot of squash. I think it’s the finest game ever created, and the only one where men and women can compete on an equal footing. 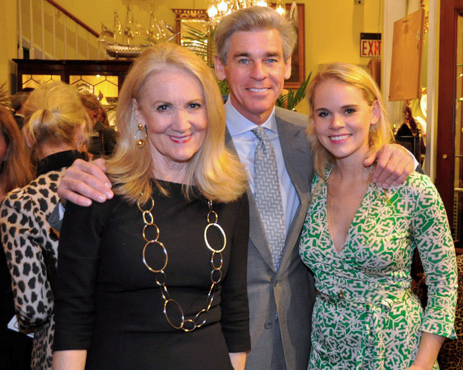 Mr Tompkins at a benefit for The Fund for Park Avenue, which manages the flowers and art work on the Park Avenue median, with wife Karen and younger daughter Suzanne

Not one of my brothers or sisters (I’m one of five) were startled by this business decision. My style has been consistent since I was old enough to make my own choices. When I was at Deerfield, fashion was defined by three icons: Brooks Brothers (for Harris Tweed sports jackets, they were the thing then), L.L. Bean for the boots and their grey “Woodsman” trousers that were something like a 30oz. weight, and could practically stand on their own, and Bass Weejuns for shoes. That was it, and how you put it together defined you. So that was the first taste of the classic look. My father was a member of the New York Stock Exchange, as well, and he bought everything in London, Norton for suits and Maxwell’s for shoes. He was a handsome gentleman and his taste certainly informed my own.

My knowledge came naturally. By that I mean, when you care enough about anything, you’re always trying to improve the result. I met George Glasgow, my shoemaker at Cleverley, 36 years ago when he was working at New & Lingwood. A friend introduced me to Simon Cundey, who owns Poole, in the late nineties. Aside from the artistry they’ve produced for me everything else came by just being observant. I don’t wear suits every day as I did for so many years. Usually I wear my make of trousers and shirts and a jacket. One thing I never wear, and haven’t owned for 35 years, are bluejeans. For serious dress I only wear Poole. My shoes, as above, are from Cleverley bespoke. I think Beretta makes sensational outerwear at prices that are astoundingly reasonable. I also, occasionally, wear Schneider tracht. 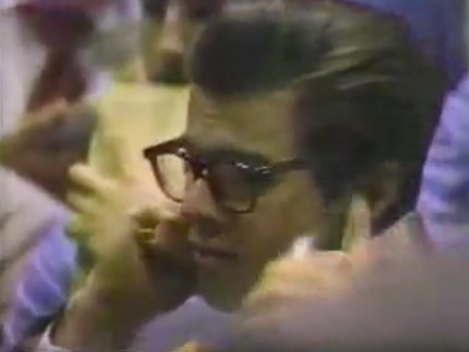 Mr Tompkins as a young trader in the New York Futures Exchange trading pit at the beginning of his proprietary trading career, 1982

My business was born as I listened to my daughter’s beaus complain about a lack of upmarket shirts and trousers to wear in an office setting that no longer demanded suits. The demand was, clearly, solid, but the supply was sparse. So last June I designed the shirts and trousers that became the collection which launched in November (see The Trad for that coverage). I’ve been well received so far, especially in the South and West of America where this kind of clothing cant be bought in a store.

There are two items I’m developing to fill out the line. First, I’m working with a factory in Portugal to produce an elegant loafer with a chisel toe. In mens’ shoes there are only two evergreen models here in the States, Gucci and Belgian shoes. Neither has changed, like the Porsche 911, for the past 50 years. I expect this loafer will have the same appeal. The other thing Im designing is a casual jacket along the lines of a gamekeeper’s smock. Both Arny’s (the “Forestiére”) and Beretta (the Maremmana) are examples of what I’m driving toward. Men need jackets for the pockets, but I think as formality has declined a less structured jacket is called for. My inspiration came directly from Patrick MacNee in the Avengers. His suits and jackets were designed at his direction in the earlier seasons of the show, and, later, by Pierre Cardin.

The Tompkins store, with elder daughter Frederica as model

How you look in any mode of dress begins and ends with the shoes. If the shoe isn’t elegant, everything else is diminished. Aside from Cleverley, there are three shoe makers that I consider quality. Corthay and Aubercy in Paris, and Gaziano and Girling in the U.K. My shoe size is 12 1/2 so I always have my shoes blind welted (that’s where the welt of the sole is flush with with the uppers). This refines the silhouette of the shoe further.’