Keikari’s left-hand corner flies the banner of Rozsnyai (pronounced ROASH-gnaw-yee) shoes, so this article is not a review but a presentation of the Austro-Hungarian school of shoemaking from one company’s perspective. The history and selection of these cordwainers have been featured in June along with a few select photos of this MTM pair’s birth, but now it’s high time to take a look at the make and finish. One Hungarian house is mentioned often thanks to their fascinating book and wide range of lasts. The country’s long history of the gentle craft has made Budapest home to several makers more, with varying levels of international repute. Rozsnyai is one of them, and this is their shoe story. 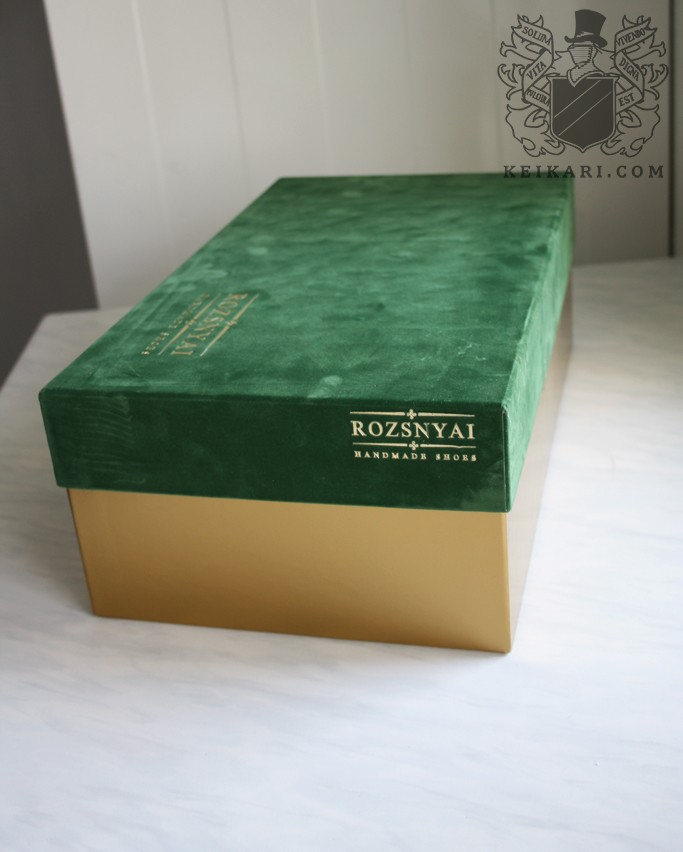 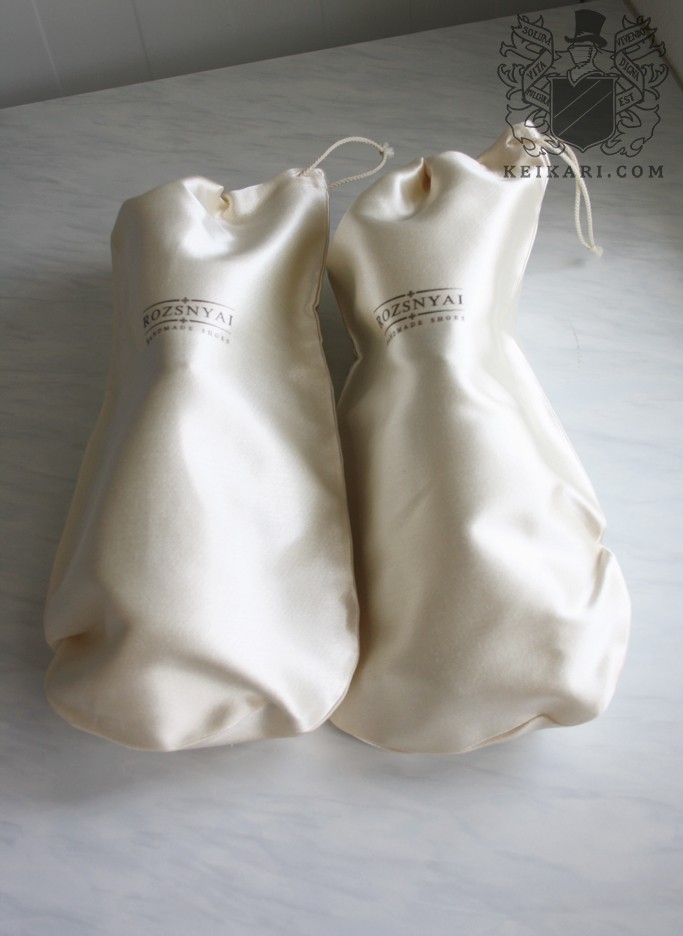 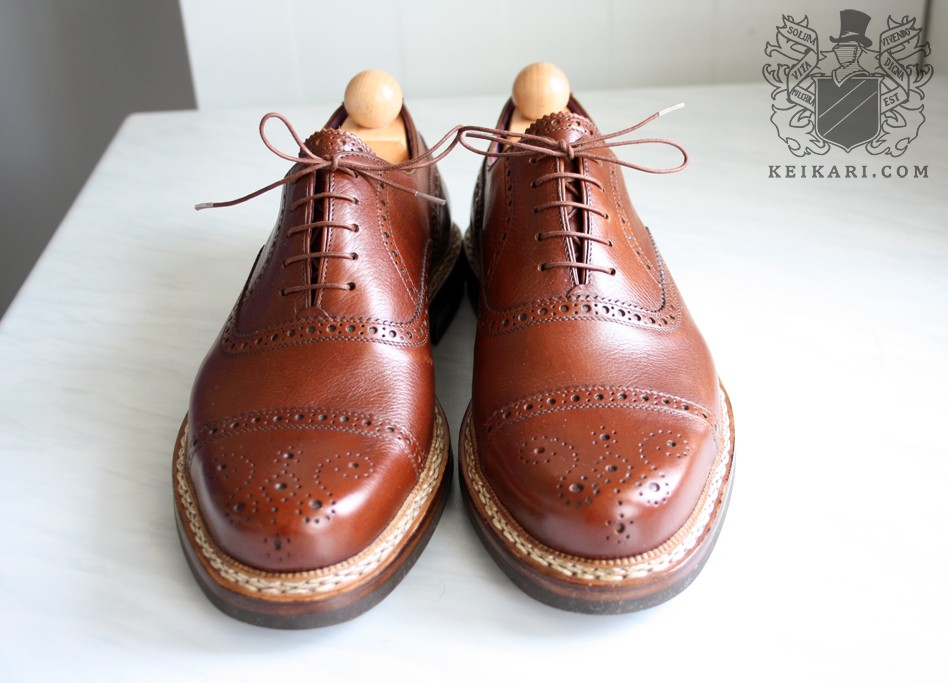 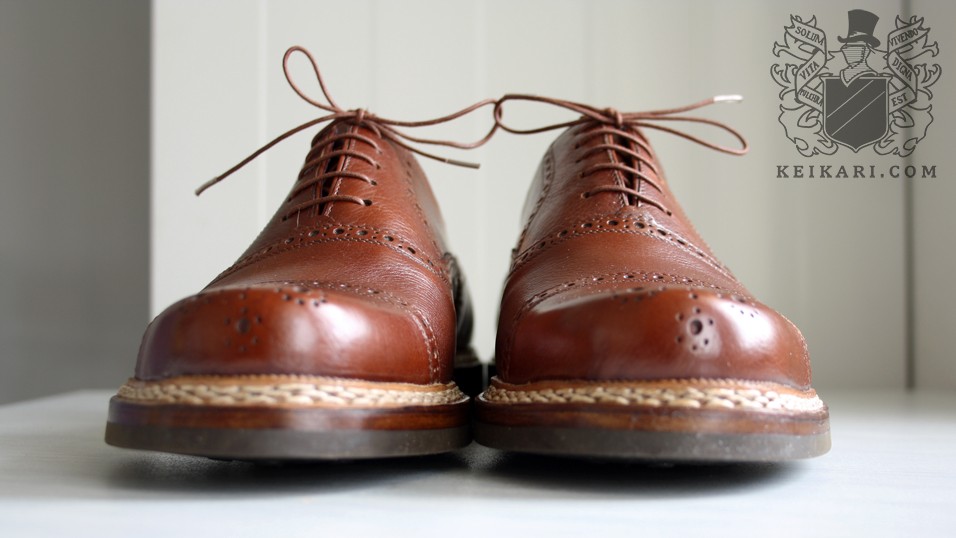 The example pair is a Budapester variant in mid-brown Italian buffalo leather with a 360-degree natural storm welt, white goyser stitching, Eton rubber sole from Vibram and my signature choice of purple lining. A variant because the traditional Budapester is a derby, usually with an elongated wingtip, but this model is an oxford — an interesting mix that caught my eye. Rozsnyai’s pairs arrive in a large, golden, sturdy shoebox with a matte surface and a green velvet lid with the maker’s gilt name. Shoeboxes are too often dull workhorses, designed and made for convenience rather than presentation, so this one made me smile. 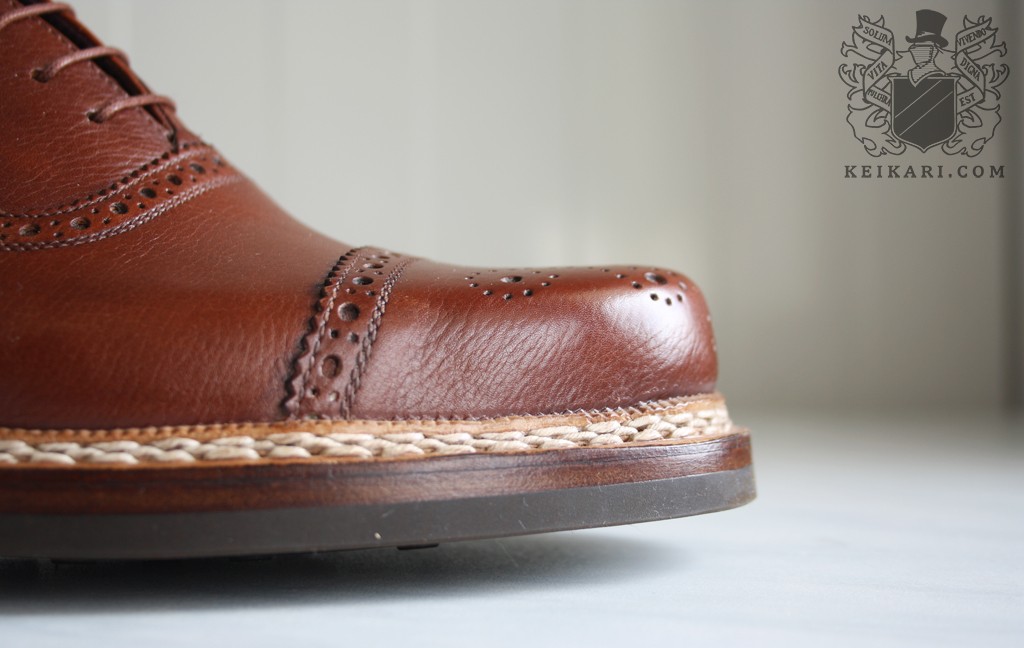 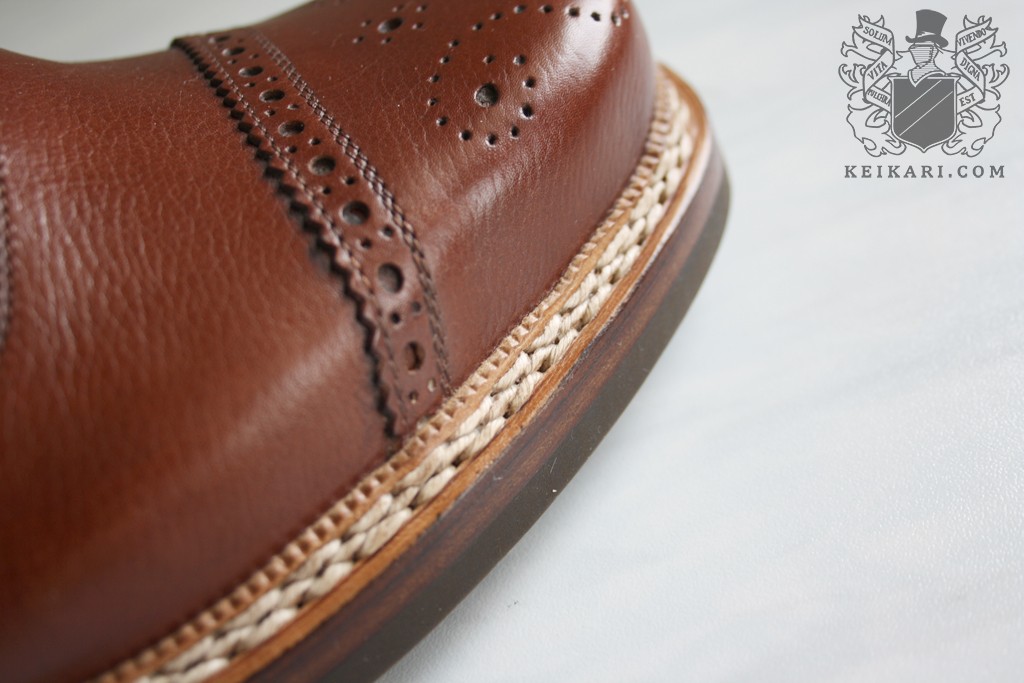 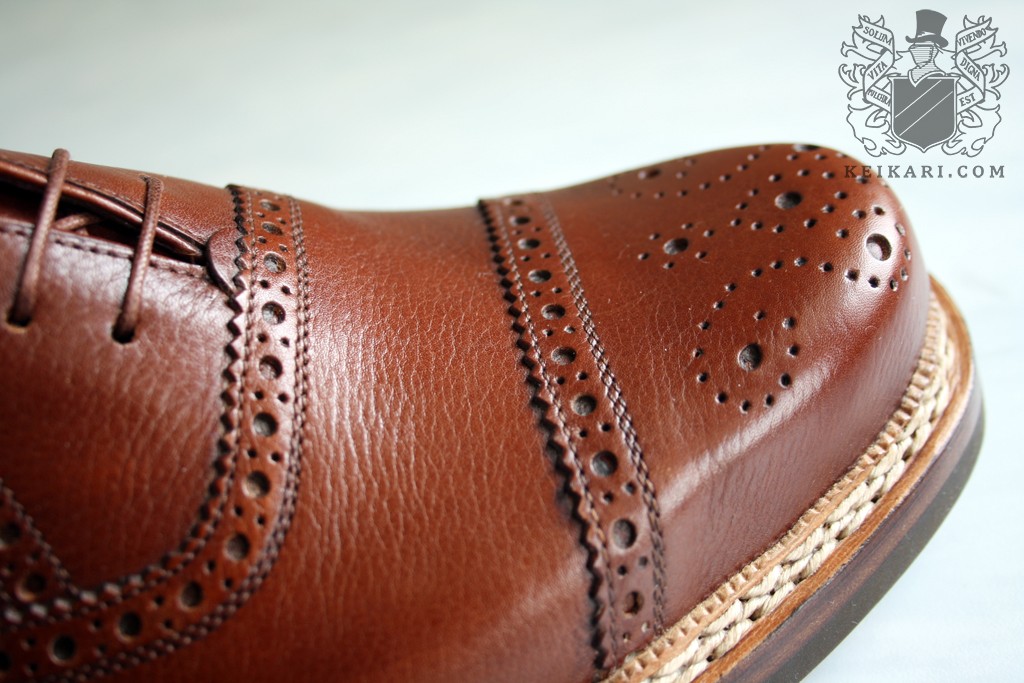 The U-shaped shoe bags continue the chosen matte form in cream colour and are made from polyester satin instead of cotton flannel. Though on the small side, the bags are sturdy and made to last. Rozsnyai’s shoe trees are unpolished and -lacquered, with a beechy smell and a hefty knob as well as toe to fill the Budapester last. The heels are rounded and shapely, the instep curves with a strong angle. The spring has enough give without being tight. 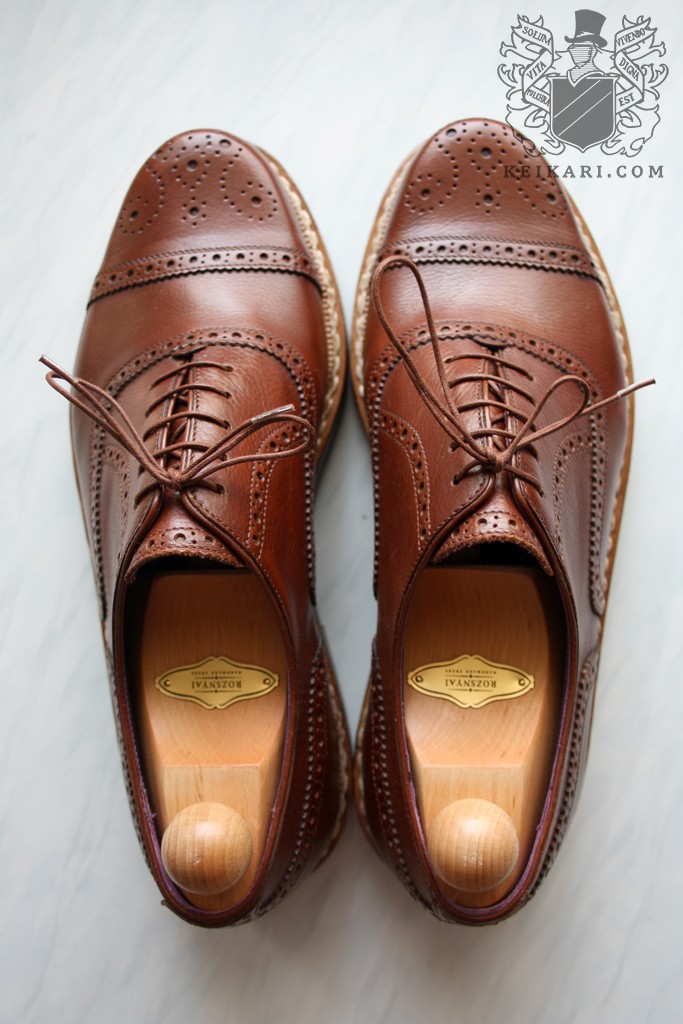 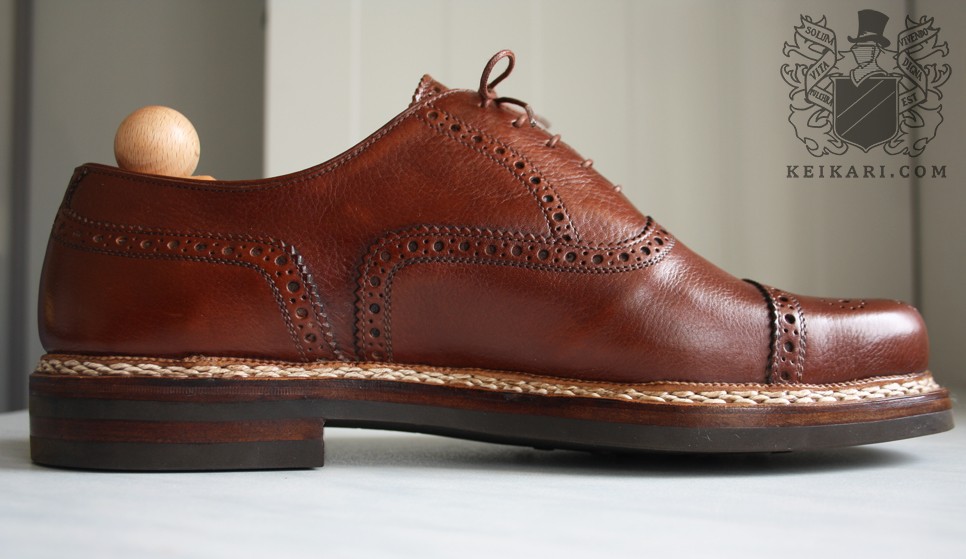 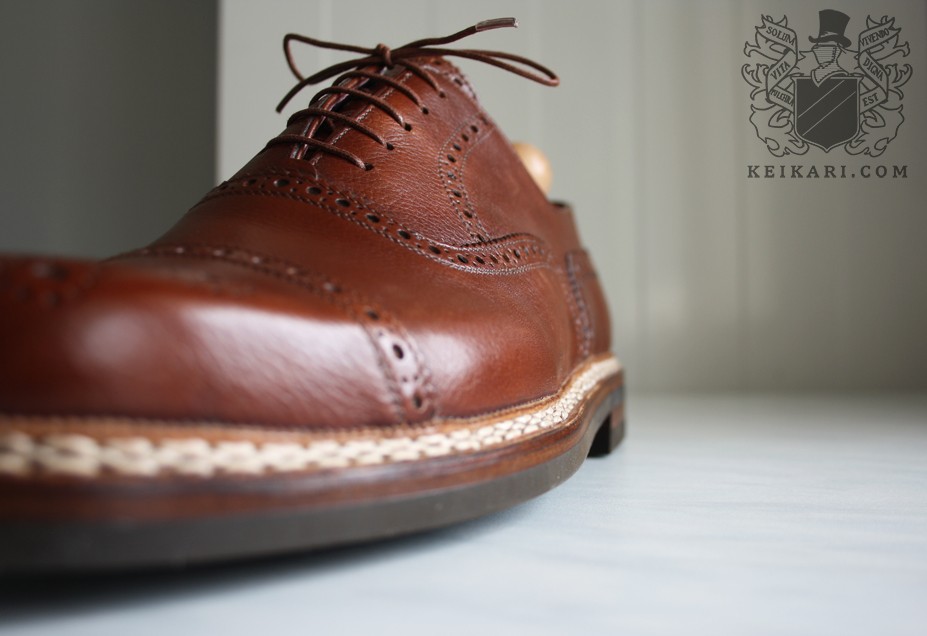 The upper leather is surprisingly pliable and soft for buffalo, with a small, neat grain. Smarter than I expected. Thanks to the Eton rubber soles, which are softer than Dainite but harder than Ridgeway, the pair is heavy. Coupled with the Budapester last with its high-reaching toe and the goyser welt, the end result is rus in urbe in shoe form. These stitchings travel around the welt in even, tight pairings. The leather stiffener makes the toe area extremely stiff just like the heelcup. The latter has more give around the sides of the ankle but very little at the middle. The uppers are joined with exact, tight rows of thread in mid-brown colour to match the leather. 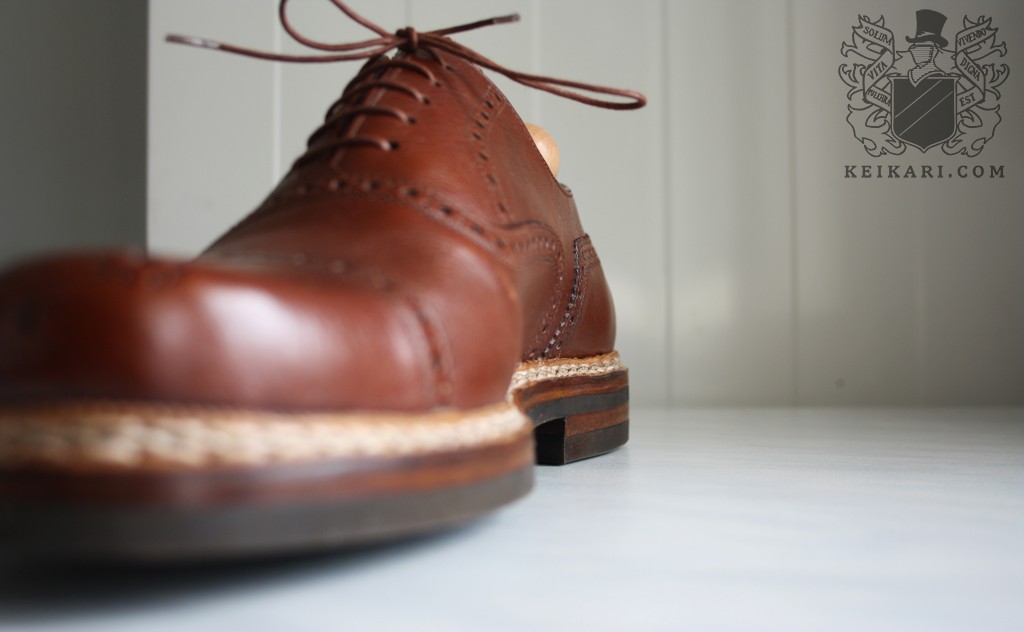 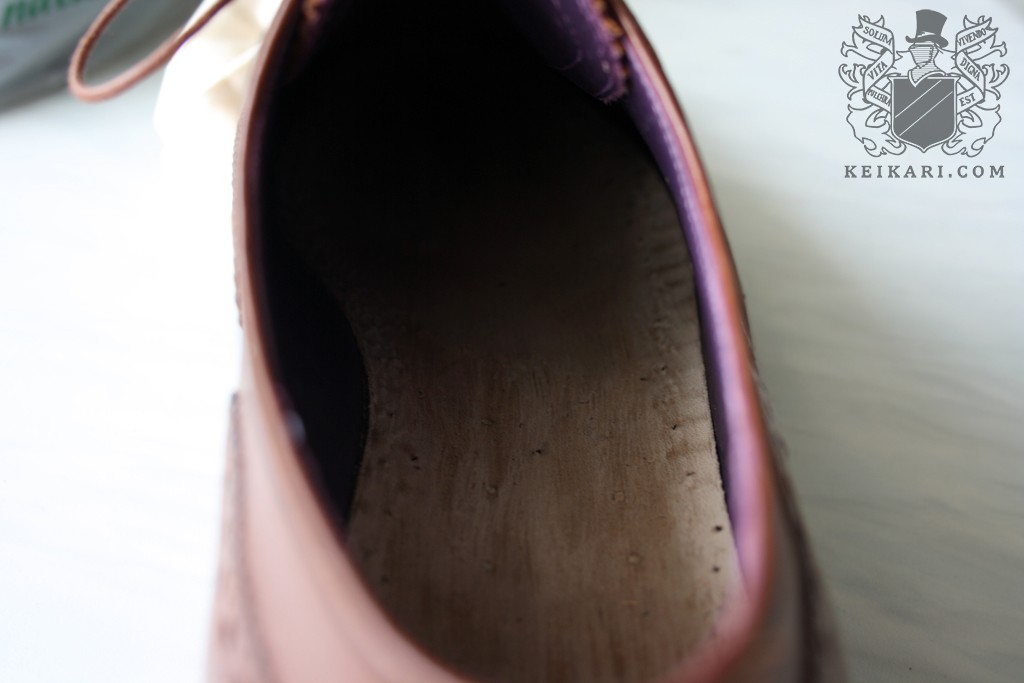 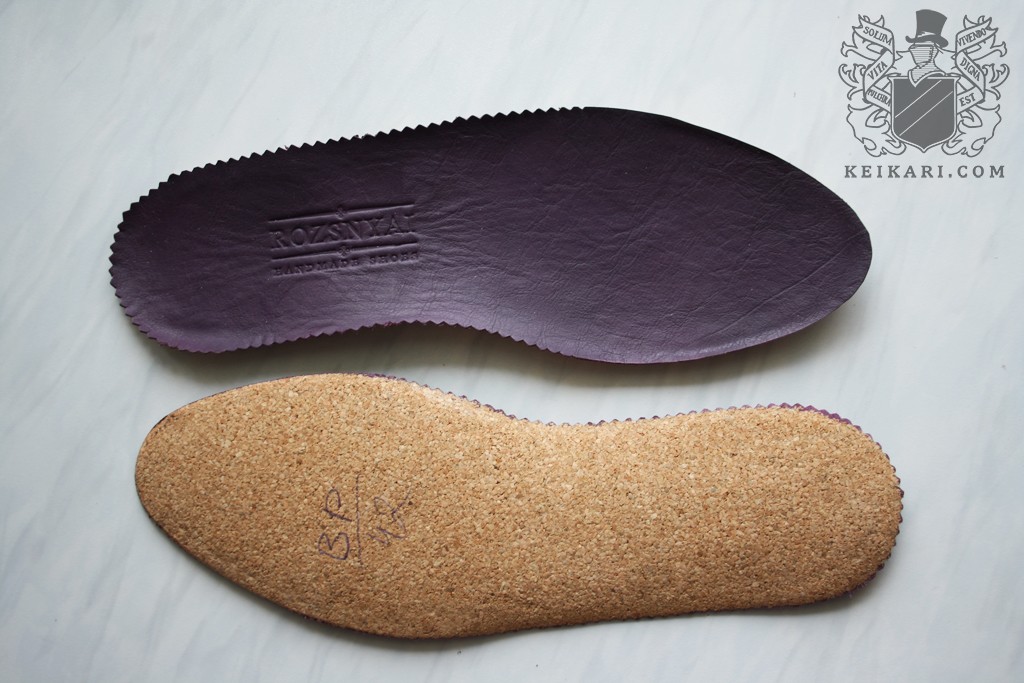 While the last follows the contours of my feet naturally, as is proper for a MTM pair, it has no aggressive curves so beautiful on smart shoes. The instep is very high as well as the heel cup, a surprise that was bested with separate, high, cork-filled sock liners. Three details separate a Rozsnyai pair from others. The insole is rough and unfinished, but covered with a separate, un-glued cork sock with pinked edges. A detail I haven’t seen on other pairs. The same goes for the sewn shoelace holder on the tongue, and the leather arch support which reaches from the heelcup to the middle of the shoe. After inquiring about the three, I was told that they’re default details on all models. The company’s artisanal make allows its cordwainers plenty of time to make each step the good old way, in true Hungarian spirit. 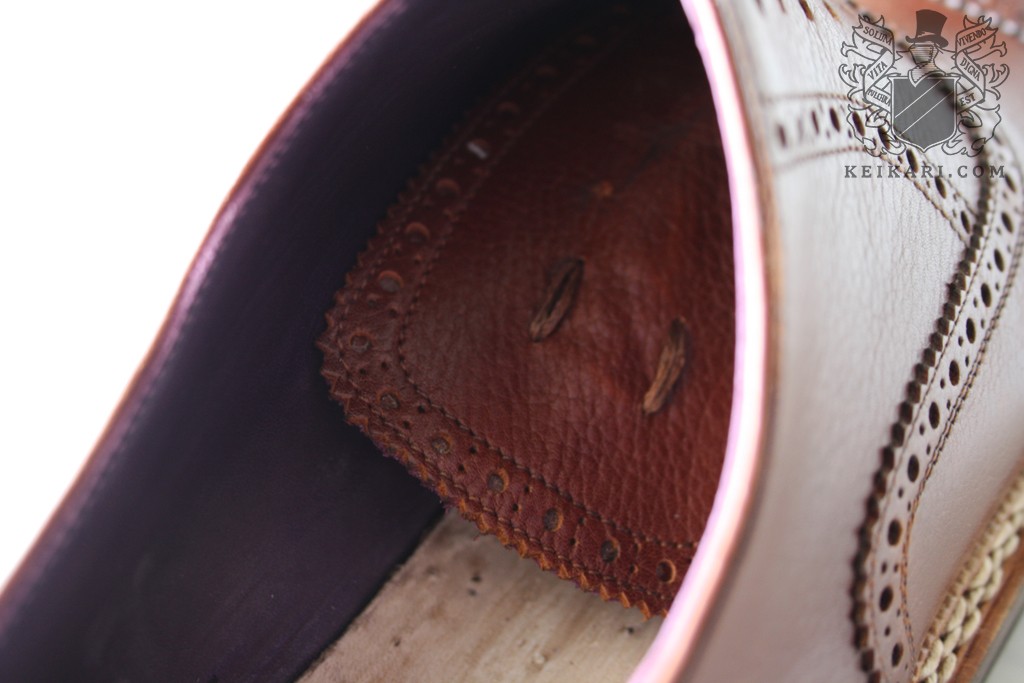 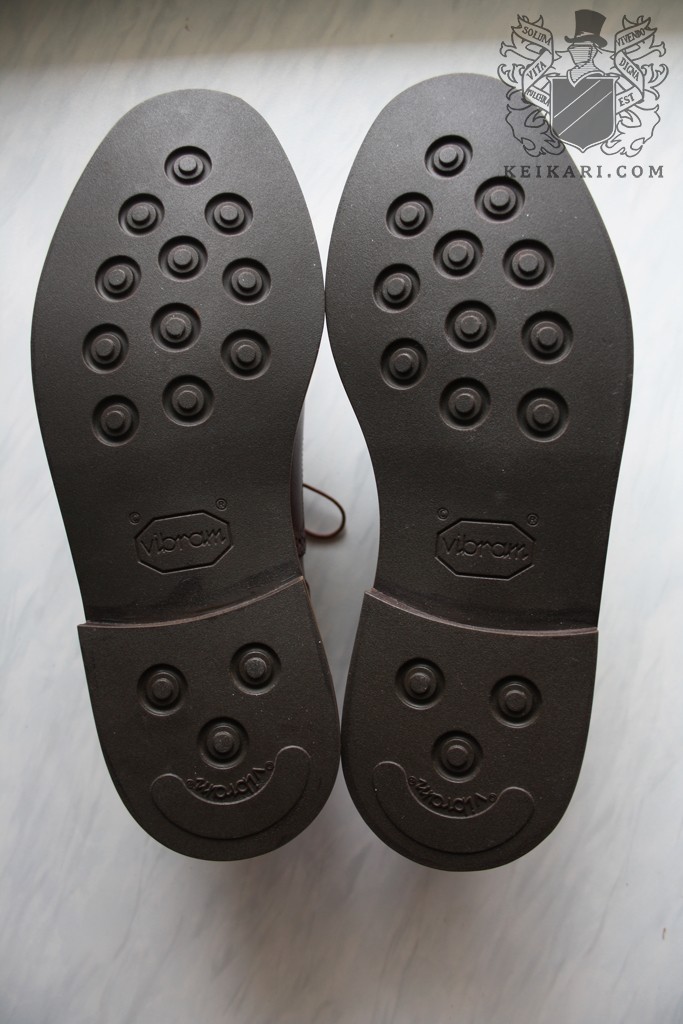 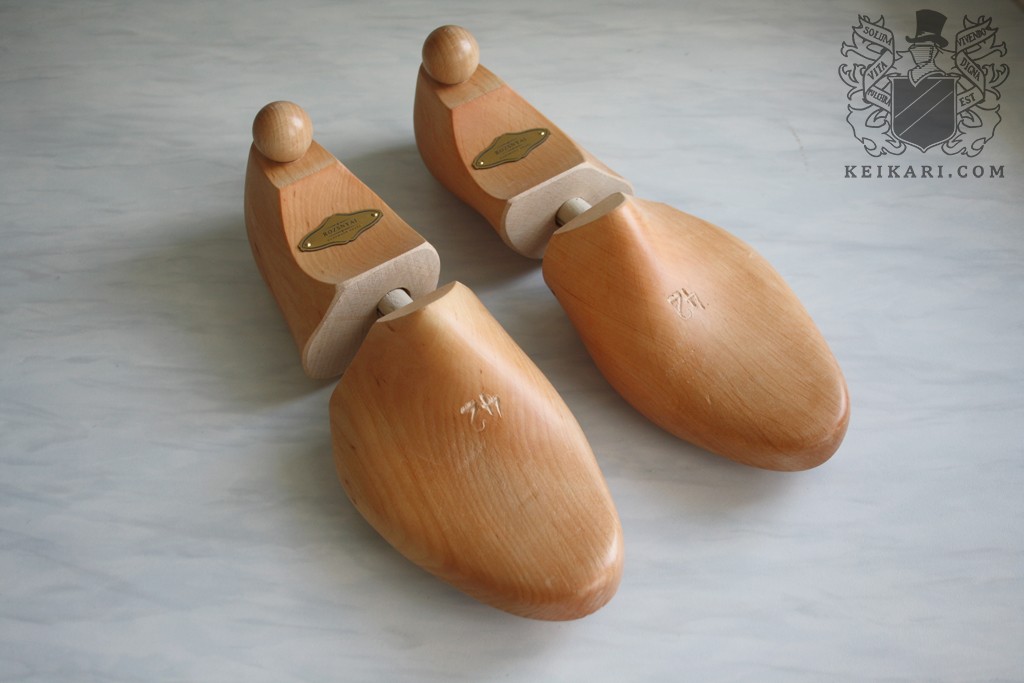 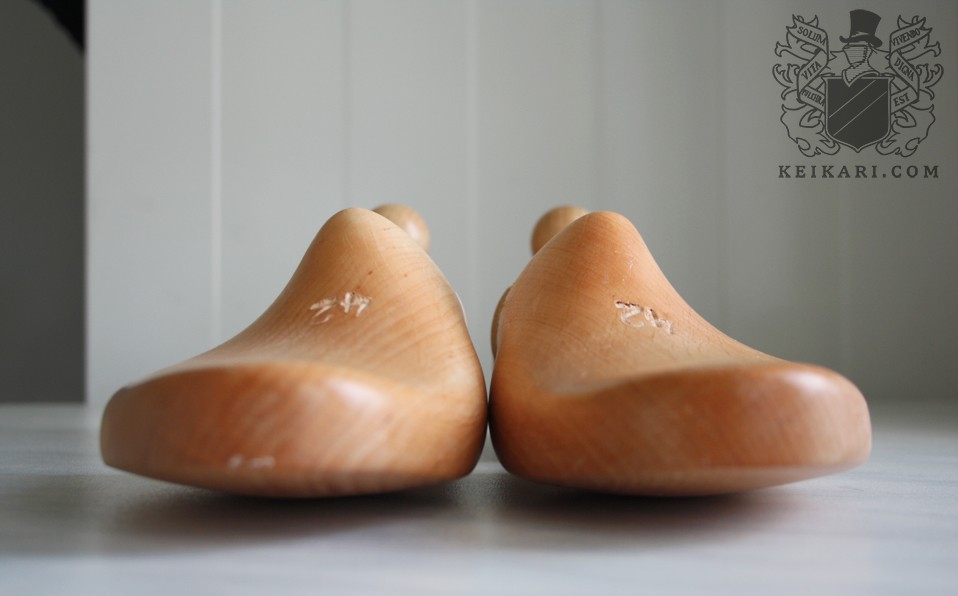 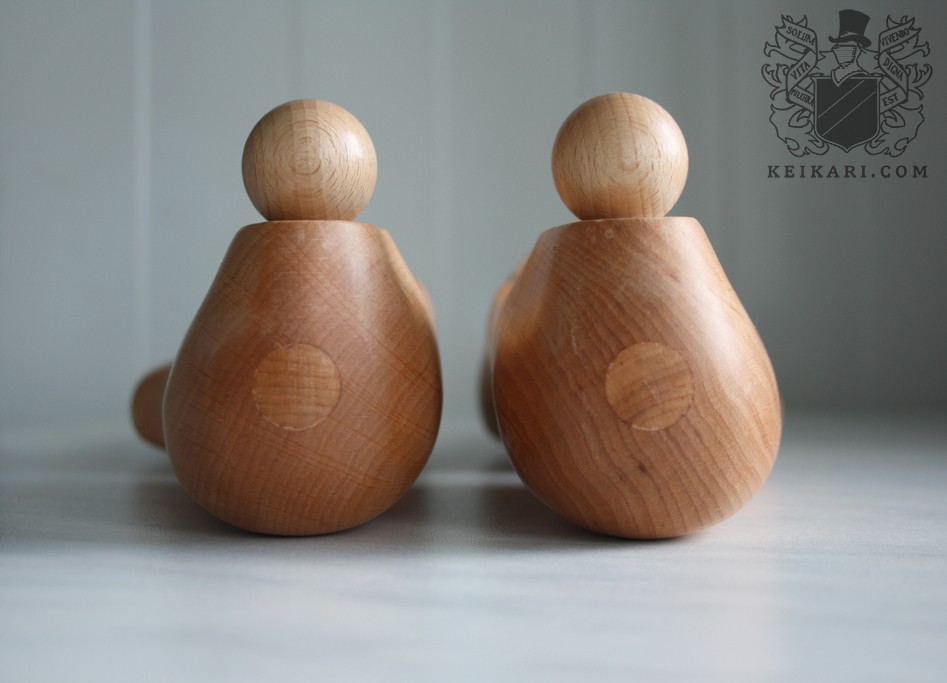