Gemming is a construction method widely used by shoe factories since the 1950’s. In fully handmade shoes the cordwainer pierces a channel through the insole, and stitches the welt through the insole to the upper. The outer sole, in turn, is attached to the welt with lock-stitching. With this method completed, the outer sole — subject to most wear and abrasion — is ultimately kept in place by the insole. Gemming is a different animal entirely. Instead of piercing the insole, the outer sole is simply attached to a strip of canvas glued and cemented to the insole. In place of stitches to the insole, the shoemaker has placed a gluejob. Its benefits are manifold. Instead of using hours to carefully pierce and stitch the insole, gluing is fast and effective. The factory production is expedited as less shoemakers are tied to the slow manufacturing phase, and the customer receives his pair faster and with a cheaper end price. 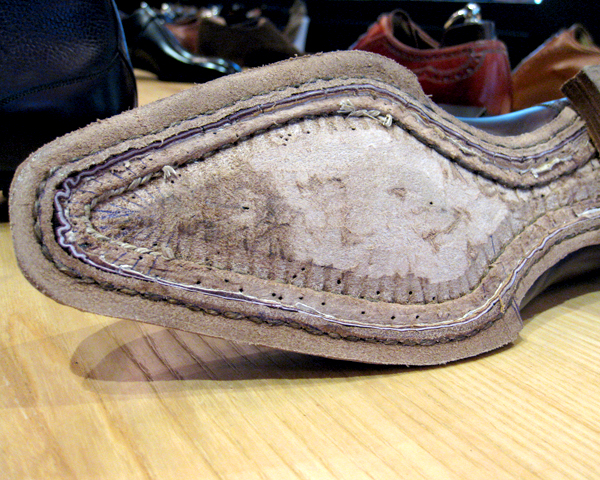 Cordwainer D.W. Frommer II defines the method as follows: “Gemming is a process that involves laying down a canvas rib around the perimeter of the under-surface of the insole. The rib is called gemming. And its purpose is to substitute for the leather holdfast…and to do it cheaply and quickly. It can be recognized by the white strip you see in most photos…sometimes ‘pinked’ sometimes not. The gemming is cemented to the insole. That is the only thing holding it (and the shape of the shoe) in place. The welt is machine stitched to the gemming and the resultant insole cavity is filled with cork.

Now, it bears repeating…in almost all instances, the gemming is held in place solely by cement. And that is its first weak spot. The cement will fail, probably even before the shoe is in need of a resole. When the cement fails the gemming slips and the shoe will walk out of shape. And anyone attempting to resole without the original last, faces the nearly impossible task of trying to re-position the gemming.” In short, gemming is a substitute for hand-welting, used to hasten production and profits, while guaranteeing a certain level of attachment — and yet Janne Melkersson, a third-generation cordwainer from Sweden, has repaired gemmed shoes for several decades without a single failed gemming experience. Millions of gemmed pairs have been produced since the 1950s; factories would have surely abandoned the method if failures were wide-spread. 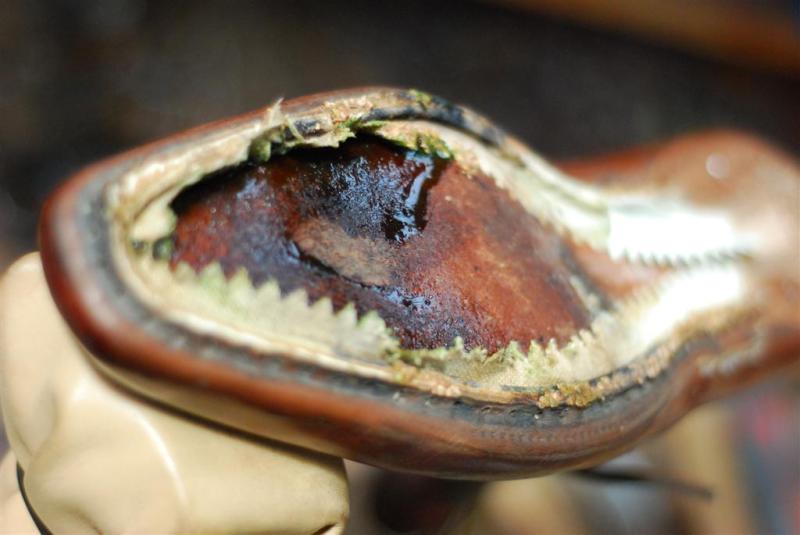 Gemming is the go-to method of shoe factories and price alone is no proof of quality welting. Factories like Alfred Sargent, Gaziano&Girling, Edward Green, Ludwig Reiter, John Lobb Paris, Alden and Carmina use gemming. All cheaper footwear, like Loake, Allen-Edmonds or Barker, all either gemmed or entirely glued. Instead of listing the makers using gemming, it is much easier to simply mention some hand-welters. These can be found below, though the list is far from quintessential. British factories have opted for gemming due to high labour costs, while Italian and Hungarian makers still benefit from cheaper labour, which allows them to offer true handmade shoes for lower prices. Some makers based in higher-wage countries have their production elsewhere. The German firm of Heinrich Dinkelacker has its pairs made in Hungary, Saint Crispin’s in Romania. Meermin is the odd man out: while the factory is based in Spain, its labour-intense workphases are outsourced all the way to China. I wager more makers will choose this model in the future.

The question remains whether gemmed footwear can be recommended. Based on my experiences and what I’ve read of the construction method, I can, yet I must remind the reader of the benefits of hand-welting. These pairs have no glue strip subject to rot, wear or random entropy. They are held in place by waxed linen thread, first on the welt, then — and ultimately — on the insole. The attachement is strong and guaranteed by a few thousand years of shoemaking experience. Still, the glues used by current factories are strong gunks, and I’ve never managed to destroy a gemmed shoe with walking alone. Most likely gemming will not fail, but it just might, and this possibility alone is enough to mark it inferior in the eyes of shoe nerds. For everyone else, gemming is the most useful tried and tested method available.