Interview with Niels Holdorf and Benedikt Fries from Shibumi

Niels: I’m 25. I studied Comparative Literature here at Free University of Berlin. So the next logical step was to found a Classic Menswear label. Together with Benedikt I own Shibumi.

Benedikt: I’m 26 and co-owner of Shibumi. I made an apprenticeship as retail salesman and after that launched an online shop for streetwear which I was running for the past 4 years. 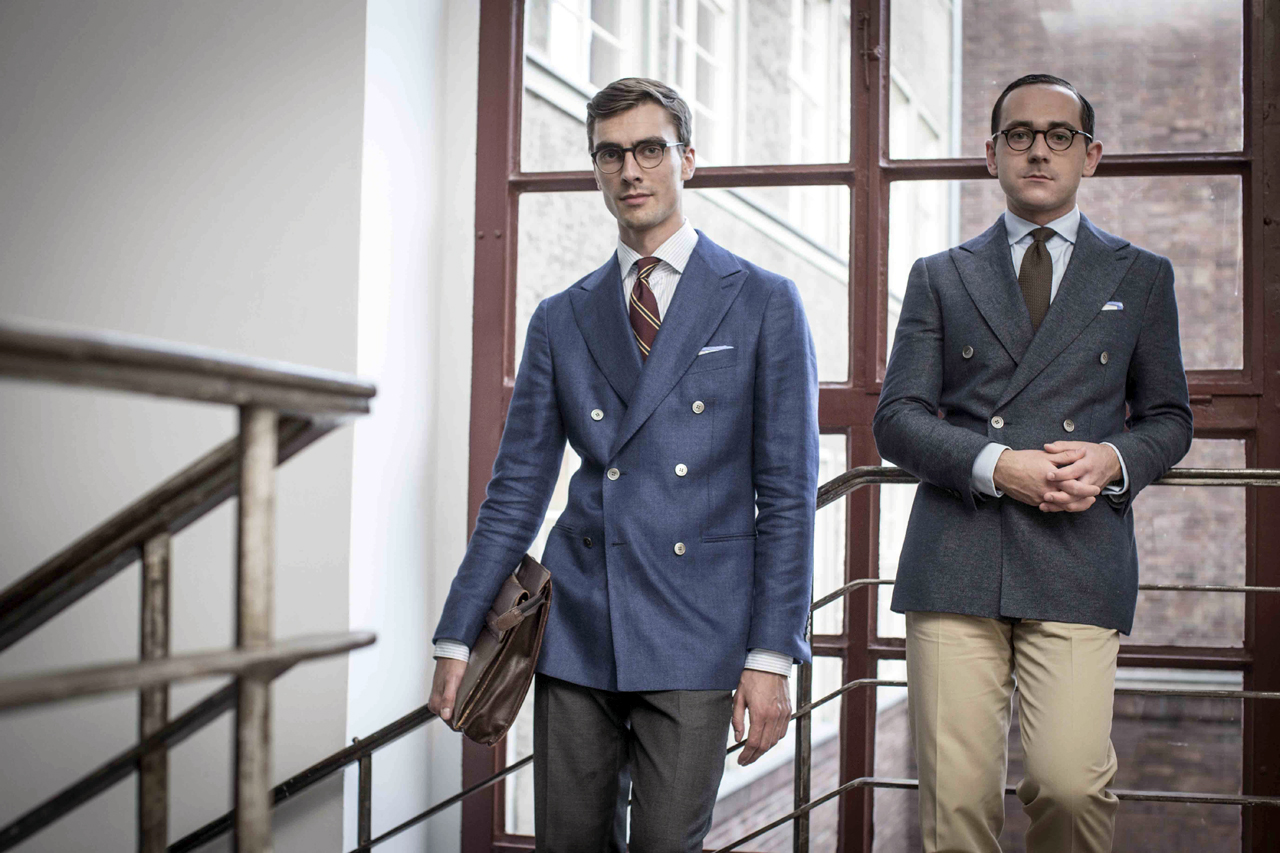 Niels: My girlfriend had to listen to me rant about lapel widths and the difference between black and white tie for as long as we’ve been together, so she was quite happy when I met Benedikt and could get it out of my system that way. Overall she likes having a well-dressed partner though she doesn’t fully understand my obsession with it.

Benedikt: No children, no spouse. 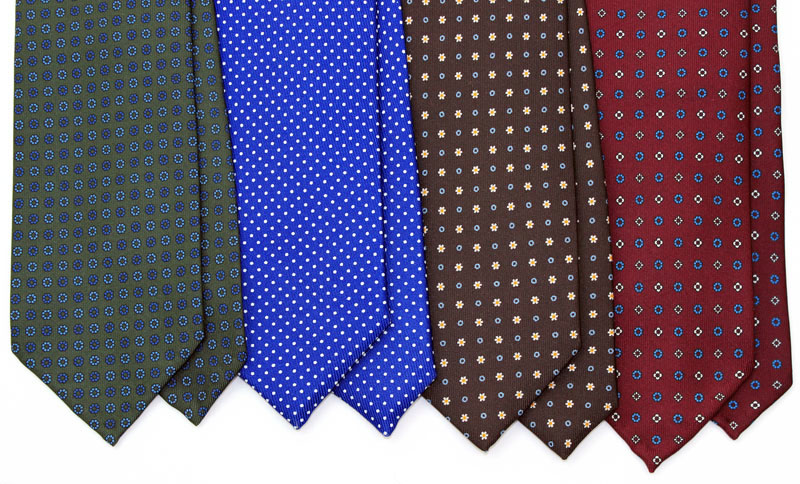 …and your parents and siblings’ reactions back in the days?

Niels: When I first became interested in classic clothing the change was quite harsh; I think it was in my last school years. Before I wore black exclusively for some years — nothing goth or the like, but just plain black clothes. In a few weeks I went from all black to leather-soled loafers, beige chinos, pink shirts and a light blue sweater! My mother was very happy. At the beginning I earned some strange looks but everyone agreed that it was a change for the better and soon everyone got used to it. Now, people (friends, relatives) come to me for advice when men’s clothing is concerned and I’m very happy about that. 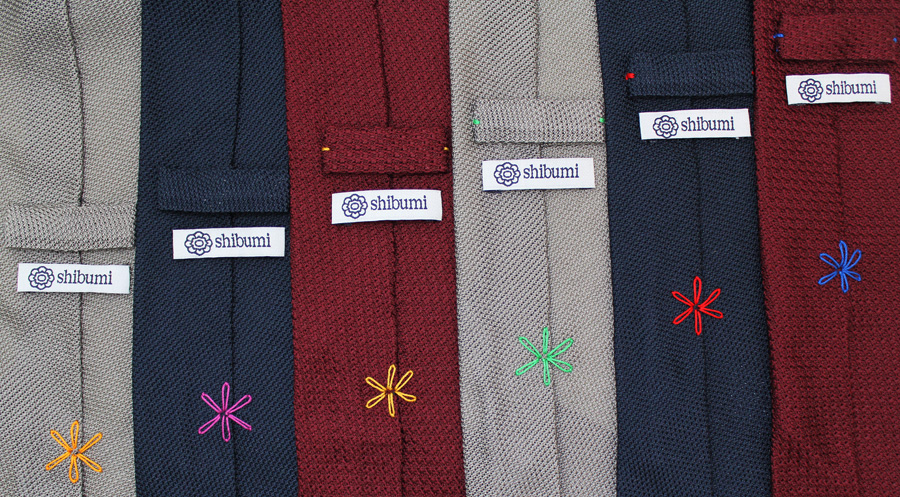 What other hobbies or passions do you have besides business and style?

Niels: Hm. Reading, I guess. I always read a lot which also led to studying comparative literature. I am a rather introverted person which also reflects in the way I dress (very simple). These days I read a lot of American writers like Paul Auster or John Updike. I also enjoy comics a lot. As a child I read Hergé’s Tintin over and over again (over years, I got all of them as birthday and Christmas gifts) and when I look at them now I notice that he paid very close attention to the way his characters dressed. Maybe that helped my later interest in classic menswear.

Benedikt: Sports, especially fitness, basketball and squash. Otherwise music, movies, books — I have top 5 lists of everything, you want to read them? :-) How did you first become interested in clothing, and when did you turn your eyes toward classics? Why classics instead of fashion?

Niels: I don’t really know why it happened — maybe it was part of growing up. You finish school, you can drink, drive (not at the same time obviously) — and I just liked the way it looked. I don’t differentiate that much between fashion and classics — after all, the clothes we wear today, even if they are classics, are a modern iteration of an archetype. Maybe what does stay the same is the principle behind classic clothing: not to be the focus of attention but to present the wearer in his best possible light. That doesn’t mean that I don’t appreciate high fashion — much to the contrary. In the classic menswear community there are some people who look down on runway fashion, usually commenting on how silly that would look in the streets. I think they get it wrong. It’s a totally different beast with totally different goals and starting points.

Benedikt: I was always very interested in clothing, but when I was a teenager I liked baggy pants better than suits. I turned my eyes toward classics 4 years ago. I moved to Berlin and changed my whole life, but maybe I just grew up. I like the fact that you can wear classic suits, shirts, ties…for so many years without going out of style. That’s great.

How have you gathered your knowledge of apparel — from books, in-house training, workshops or somewhere else?

Niels: Mostly from books and the Internet. Only later I met people whose personal style I admire, there was no-one in my immediate environment. I read Roetzel first, but his book is more eye-candy, or a fairy tale book (as he likes to call it himself); this piqued my interest. After that came Flusser and Antongiovanni both of which I really like and recommend. But the most I really learned from the Internet, first from Styleforum (I’ve been a member since 2006) and later German Stilmagazin.

Benedikt: I’ve never read a book about classic menswear. I learned a lot from online forums and blogs, otherwise I learned from chats with tailors and friends. 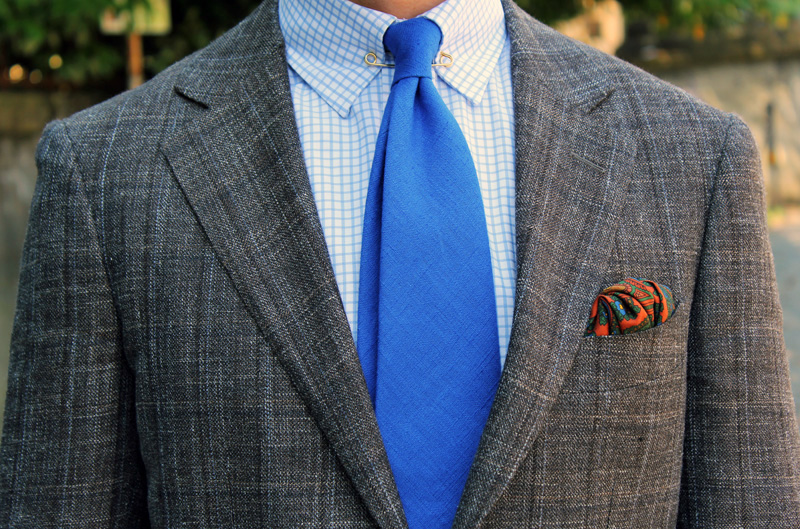 All photos feature ties and ‘kerchiefs from Shibumi

How would you describe your own dress? Have you any particular style or cut philosophy?

Niels: Hm. I’m not old enough to have a personal style and I think it’s silly to call it so before you’ve experimented for a considerable time; in fact I’m not sure one even needs a personal style. I think it should be enough to be well dressed. Ideally, your personality is what catches your opposite’s attention, not your dress. Most of my outfits have some things in common though. I don’t dress loudly, I don’t like it and it doesn’t suit me. I can appreciate it on others of course, but in general I prefer quieter outfits. There are a few things I like though; matte textures for example. Oxford cloth for shirts, flannel for suits, shantung for ties, suede for shoes. Ancient Madder silk – just beautiful. I also like blue a lot. I think I could live with an entirely blue wardrobe; navy to mid-blue suits and sport coats, light blue shirts, dark blue grenadine ties… Okay, I don’t like blue shoes. So maybe it wouldn’t work that well.

Benedikt: That’s a really difficult question, because I don’t think about that anymore. Maybe you could describe my style as Ivy League meets Napoli. But that sounds very corny. 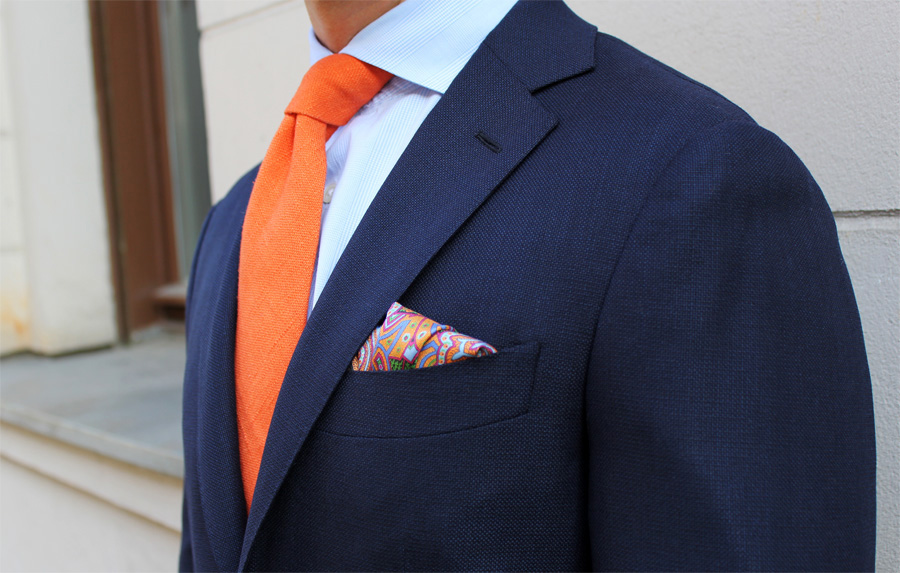 Apart from Shibumi’s own goods, which RTW makers or tailors do you favour today?

Niels: I’m tall and thin so many clothes don’t fit me. I don’t think this is necessarily a bad thing since it forces me to only buy what I really need; had I a regular 40 body, I would probably have a lot more useless items in my closet. RTW makers, tailors — although personally I wouldn’t wear it, I enjoy Kamoshita’s blend of Japanese and western aesthetics. It’s a thin line to walk and he always does so gracefully. Tailor-wise I prefer something very unspectacular — think the tailors of Northern Italy or the softest of English tailors.

Benedikt: I really dig the flamboyant style and shape which many Neapolitan tailors prefer. But my favorite tailor is Liverano, unfortunately he’s way too expensive for me. I love the silhouette of the extended shoulder combined with the extreme open quarters. I also love the clean look of the dartless front. 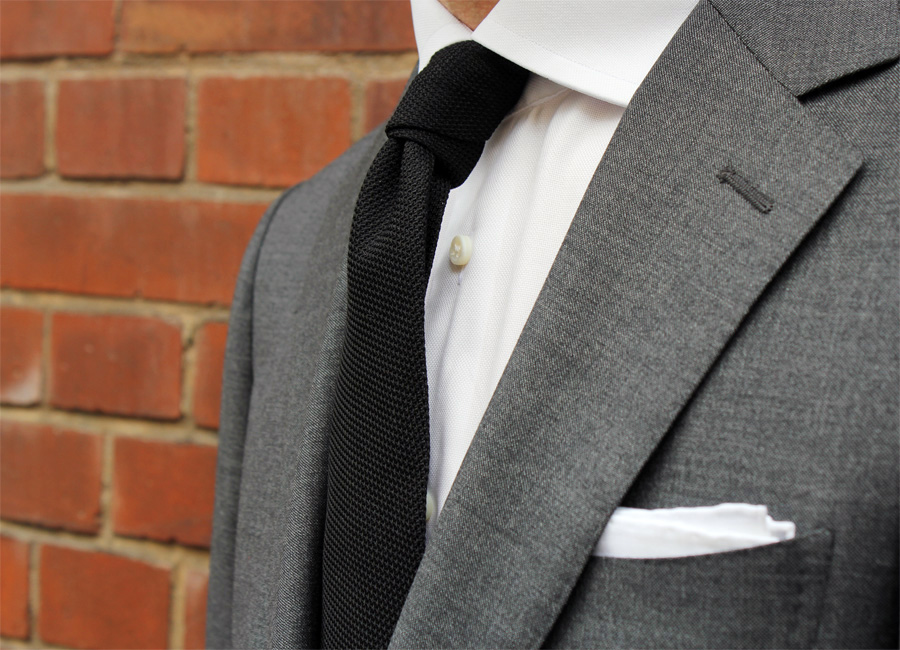 Please tell us how your company was born and what goals you set for yourself in the beginning.

Niels: When I met Benedikt he already had plans to start his own label, he was in the very first stages though. We talked a lot about it as we became friends and I realized there was nothing I had as much passion for as this. I gave it some thought and finally decided to take the plunge. What we aim for is pretty easy to explain: a top-notch product, tastefully styled, for a good price.

How have you been received so far?

Niels: We’re very happy to have been received quite well so far. I think people notice how passionate we are about our products and it carries over. 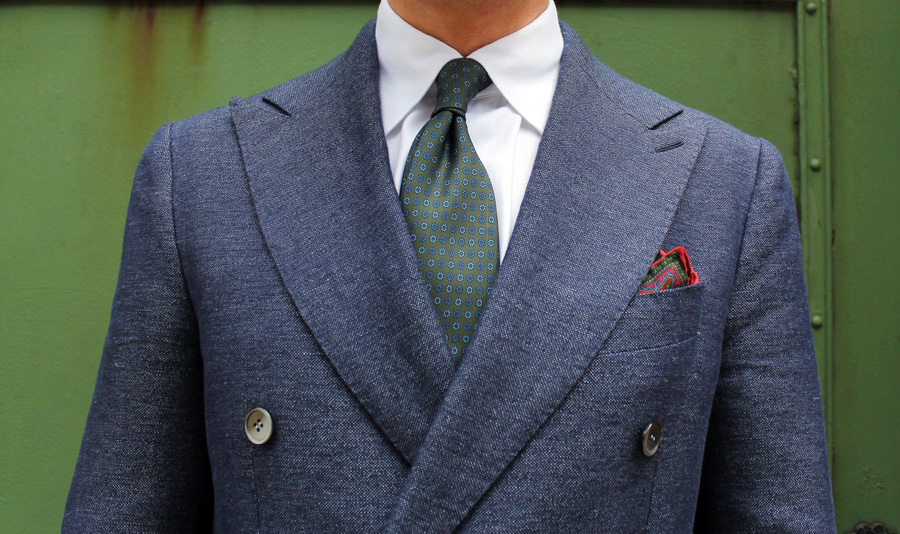 How would you describe the goods of Shibumi?

Niels: As shibui, of course :D. Shibumi stands for a Japanese concept of aesthetics and means something along the lines of “simple beauty without flashiness” or “refined elegance”. Shibui is the adjective that goes with it. It perfectly embodies our understanding of classic menswear: being well-dressed without being loudly dressed; classic style that is not an anachronism. We’re both quite young and believe very much in a classic and contemporary look.

There are dozens of accessory web stores in Germany alone — why should my readers choose you?

Niels: I think there are a few factors that speak for us. First, we offer very good quality for a very fair price; second, what you get when you buy Shibumi is a classic item, tastefully and modern styled. I don’t think we do have that many competitors in this special field, especially in Germany. 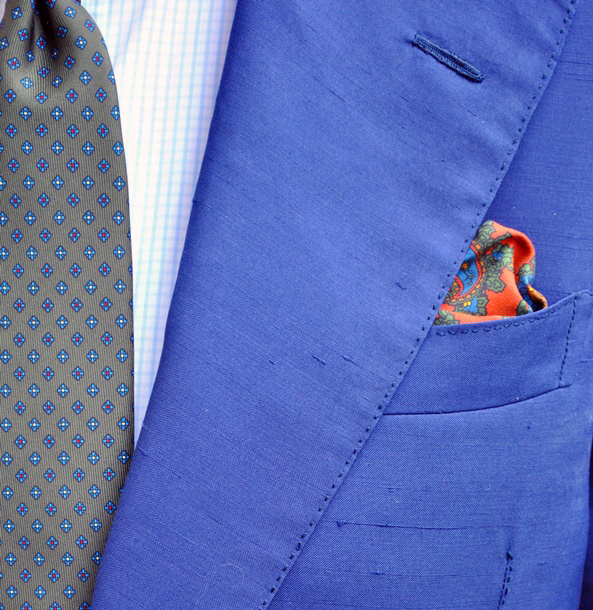 Who or what inspires you?

Niels: Many things. Color-wise I really like Japanese woodblock prints like Hokusai’s 36 Views of Mount Fuji. There are a few well-dressed men whose style I admire, some of whom I know, like our friend Herbert Stricker, some of who I don’t know like Yasuto Kamoshita.

Benedikt: I never thought about that before. For color combinations, I’m sometimes inspired by art or stained-glass windows of old (especially Italian) churches. But I think mostly I inspire myself. 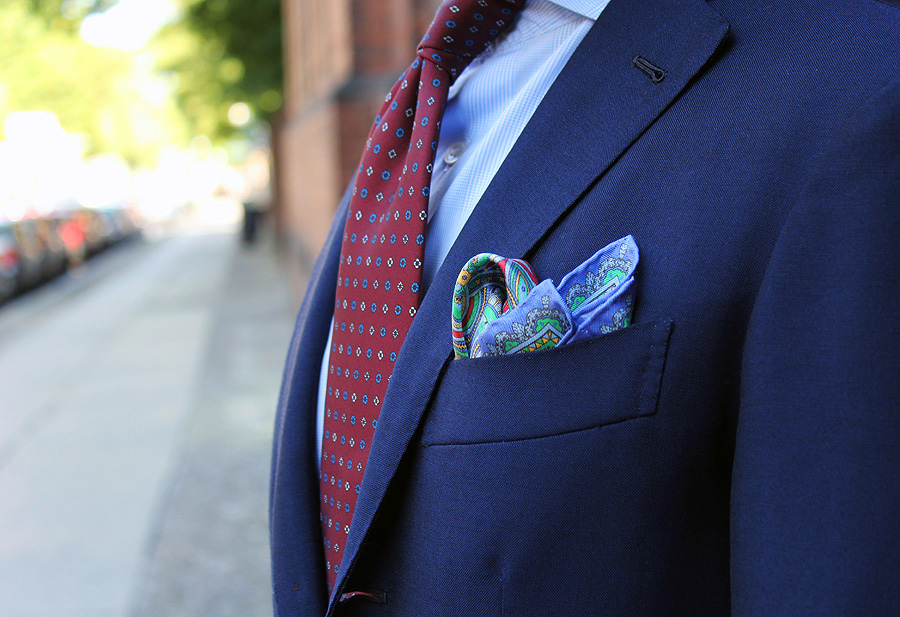 What is your definition of style?

Niels: Style, for me, has a lot to do with appropriateness or, to use a less complicated word, fit. In every sense of the word: clothes have to fit, meaning they have to fit you, fit the occasion, fit your personality, fit your mood… if all these come together, you have style. But just in the clothes sense — real style has very little to do with clothes.

Benedikt: Not surprisingly, I agree with Niels. I would also add that if you are more comfortable in jeans and a t-shirt, you should wear that. Your clothes should not be a costume, no matter if that costume is classic. Anyway, even if you are a t-shirt kind of guy, you need at least one good suit, shirt, tie. There are just occasions when you have to wear one. Over the years you must have learned quite a bit about style. Is there something you wish more men would know? This is a great opportunity to make a lasting influence on my younger readers. Most of us aren’t blessed with rakish relatives, which makes learning about style a challenge later in life — and yet another trait men are supposed to master. All tips and thoughts are valuable.

Niels: So many things. Fit is king. Subtle is good. Don’t worry about overdressing, if you’re friendly and open, you’ll be received even better. Dress according to your age, the occasion and your mood. Classic doesn’t mean old-fashioned. Learn the basics, the classics! There is a reason they are classics. People always say first learn the rules, then break them. Perfectly true, but I feel many people don’t do the first part. In the end, it’s just clothes. They’re not really important. Be water, my friend.

Benedikt: Trousers always should have cuffs and creases. Forget belts — try braces or side-adjusters. Don’t buy too many things! Four suits of great quality and perfect fit are so much better than thousands of suits you only bought because they were cheap or on sale. Buy only things you really, really want or need. Don’t try anything, just do it.