A little something dear from NHK: this 25 minute documentary follows the respectable craft of mending holes through invisible seams by a duo of father and daughter. The end results are nothing less than astounding.

Just a little snippet featured in a men’s magazine from years back, showing the style of The Hanger Project’s older advertisements. A hung-dinger, if you may. 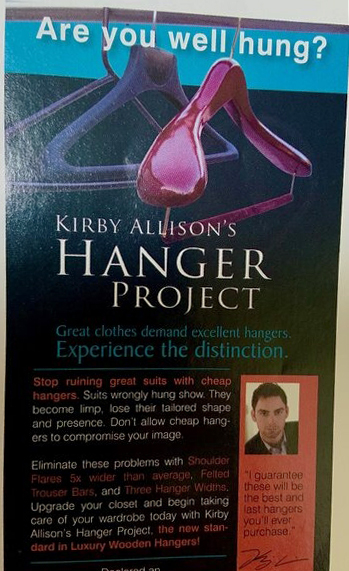 I’ve recently developed a case of vintage clothing-fixation. As with most things in life, there is a rub. Few pieces from the 1920s and 1930s, which I most admire, have remained and most of those clothes have not survived in great condition. To top this off, most men in that period were much shorter and slimmer than today. The most convenient way, then, of getting some good pieces in hand are reproductions. The rub with this route is that few companies offer them. Out of those, several have opted for poor materials or modernised too much. Thus, I’ve been searching for the best kind of makers and offer a short list today.

Darcy is not named after that heart throb character but after the lady who founded the company in 2004. They offer a wide range of repro designs and have plenty of business from theatres and film production companies. Well, at least had before this whole thing with the Corona. DC is a boon for the man who wants to wear detachable collar shirts.

Oldfield was founded in 2009 and has a special focus in British menswear from the 1920s to 1940s. Their pieces are made from British cloths in the UK, mostly using authentic patterns from the heydays. Such dedication leads to higher prices than what most repro companies ask for. The selection is small and true to the times.

Cousin Jack is a small range of men’s clothing made by the parent company 20th Century Clothiers which runs several companies. Currently they offer a few models of fishtail back trousers, always difficult to find, as well as collar shirts. These are peppered with a small selection of accessories. Here’s hoping that they find enough customers to widen the range.

SJC was founded by its namesake in 2013 and offers a wide range of clothing from head to toe. Produced in limited numbers, many pieces are snatched by long time fans when a new batch of goodies are added. Mostly manufactured in Asia, Cathcart has recently had new designs made in the UK from British cloths. All designs look the part from the 1920s onwards and some pieces are made from fabrics made only for the company. Many use original patterns. That’s dedication.

Pike Brothers was originally a small English tailoring company that went defunct in the 1960s. After half a century, one Fabian Jedlitschka found an old uniform made by the Pikes for the American army. He was struck by the piece so much that he decided to start designing similar pieces with his wife, Anna Schäfer. Today, Pike Brothers is a German company that designs a wide range of clothes using original patterns. The manufacturing takes place in Portugal and Turkey, and cloths are woven in Portugal, Turkey, Germany and Japan. The oldest repro pieces hearken back to the first decade of the 1900s, while most designs are from the ’30s to ’60s. Pike is devoted to denim and workwear and gruff vests, so there’s a special place in their heart for Rock’n’Rollers and bikers. Army repro is another popular offering. Still, there’s always some pieces that suit the tailored chap as well.

Chester Cordite has poor info about the company on its site. Still, their suits and shirts and jackets have that wonderful vintage look, and are apparently made in England. The company was founded by Stuart Emmerton who runs things with a sharp eye. Regrettably, several shirts and suits use polyester mix materials so it’s best to read closely all item descriptions. The cuts are mostly inspired by the 1930s and 1940s. The company has supplied repro clothing for several theatre productions.

Thomas Farthing was founded in 2012 by Adam Skyner and Thomas Russell, and the owners have a soft spot for the 1920s to ’40s. The collection is large from head to toe and all pieces are made in the UK or EU. TF specialises in tweed clothing and most of their range is made according to house designs. While caps and accessories and shirts mostly look the part, I feel that the cuts of several of their jackets would need some tweaking to match that ’20s to ’30s look.

Few artisans share stories of tailoring as naturally as Thomas Mahon. This piece is one hour well spent for anyone with an interest in British crafts.